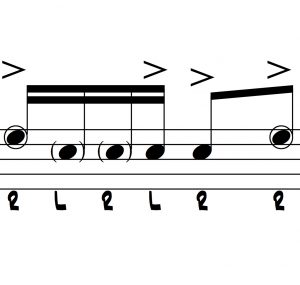 Attention newbie drummers! It’s time to learn some vocabulary. Here are ten drum fills that are very simple and sound great. They’re gig tested and fairly easy to play. You just have to sit behind the kit and dig in. Practice them and repeat that practice until you’ve got it.

Remember studying a foreign language? I do. I began studying French when I was in middle school. As a student of the French language, I was directed to absorb and memorize vocabulary. Lots of vocabulary. We were given page after page of vocabulary worksheets with French words and their English translations. The pages also gave examples; sentences in French that included the new words so we could understand how they were actually used in “context.”

This work sheet, “10 Essential Drum Fills” is the drumming version of those worksheets I got in middle school. Learning this vocabulary works much the same way as the French did. You just repeat the phrase over and over again (practice). Repeat this work until the fill is memorized. Then it will be in your “tool box” and you can call upon it as needed, on the fly, whenever you want. Makes sense, right?

PS — at the end of the worksheet, there are six spots for you to write your own fills. Please do that. It’ll be great practice for you to try to come up with your own variations and ideas.