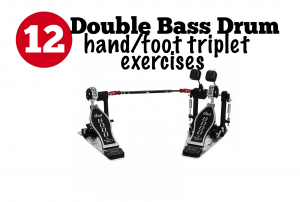 I think I’m solidly back in double bass drum land. Those of you who’ve been reading this blog for a while may have seen me see-saw a bit on this topic. One week I’m swearing off double bass (I did that for a few years when I was obsessed with Keith Carlock) and the next I’m pumped up about the possibilities double bass presents.

Now, before we go any further, let me just put it out there that I don’t consider myself to be a double bass drum expert by any means. There are some simple ideas I use and I’m working on getting better, but I’m not a machine gun death metal speedster in any way shape or form. And I’m not mocking that kind of playing at all. I mention it to suggest that some of those players have double bass facility far beyond mine.

Part of the point of this set of exercises is to give you some ideas on how to break up ideas between your hands and feet in interesting ways that don’t require extraordinary double bass drum chops. Having some solid basic double bass skills can add a lot to your playing if you play with taste. I hope you’ll see that after spending some time with these exercises.

But back to my see-sawing devotion to double bass…

It’s become undeniably clear to me that there are many things you can do with double bass drums that you just can’t achieve any other way. For example, when playing rock, ending “mini-solos” (also known as “trash can endings”) are easily enhanced using two bass drums.

I’ve been messing around with a bunch of other hand/foot ideas–many of them triplet based–some I’ve been playing for years and some that are new. As the ideas have developed, I wanted to have a more organized way to work on them.

That’s where this worksheet comes from. You can play each of the 12 lines separately, but ultimately, you’ll want to be able to play the whole sheet top to bottom and then cycle it. The hands play paradiddle-diddles for a measure, and then you play a hand/foot idea for a measure and then go back to the paradiddle-diddles again and hit the next hand/foot idea. So, you’re playing a constant stream of 16th note triplets.

You’ll want to work on the exercises slowly at first, but eventually, you should get the tempo up to 100 or even 120 bpm. Just for fun, I’m wondering if I can get them up to 140 bpm.

There are just a few things I want to mention about the PDF/exercises: 1)There are a few non-double bass patterns on here; 2) Exercise #11 is really hard! Essentially it’s a single stroke roll between your hands and feet, so don’t be discouraged if you need some serious time to get that pattern together (I’m not going to tell you how long I’ve been working on it, but it’s been a LONG time). Therefore, it’s OK to omit #11 from the exercise if you want to play the continuous 16th note triplets version of the worksheet. 3) The exercises are written only for snare drum and bass drum(s). Once you can play the ideas fluidly, you should experiment with orchestrating them on other parts of the drum set. 4) Be aware of the balance of sound between your hands and feet. It’s easy to play the bass drums too loud and over power your hands. Make sure the sound is even so it flows and the volume of hands and feet are equal.

I skip, #5 and #6, honestly because I just didn’t have those two locked at the time of filming. We all have work to do!!

My apologies for doing them out of order, but you’ll get the idea of how cool this vocabulary is anyway……In fact, notice that my hands are only on the snare and it still sounds cool. Imagine the possibilities once toms get in the mix.

Alright people, that’s all for now. See you next time!