I am a drum book freak. I love drum instruction books and I always have. From the moment I discovered the idea that learning to read music would open up a world of drumming information and learning, I was hooked. BANG! The Drum School has a huge library of drum instruction books. Below are some of my favorites. These books are more appropriate for intermediate and advanced players. This list is in no particular order–it is NOT a ranked list. Note that some of these books are rare or out-of-print. 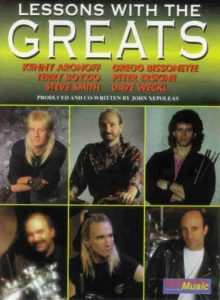 “Drum Lessons with The Greats Volume 1”
Written by John Xepoleas, this was the first book in series of two volumes, both of which are now out of print. This first book is my favorite, mostly because of the lessons that are written by Gregg Bissonette and Dave Weckl. The other drummers with lessons in the book are Peter Erskine, Steve Smith, Terry Bozzio and Kenny Aronoff. But it’s Bissontte’s and Weckl’s sections that stand out for me.

Weckl’s lesson goes over his triplet concepts which were one of the most important elements of his soloing at the beginning of his career, so it is not to be missed. Meanwhile, Gregg’s lesson explains how to use the inverted paradiddle. It’s a favorite idea of mine, and I use it often. This was the first book that I ever saw explain the usefulness of this rudimental inversion that I learned from studying with Rick Considine.

It’s hard to find these original “Lessons with the Greats” books, but there is a re-issue called “Essential Drum Lessons with The Greats” that contains Bissonette’s and Weckl’s lessons and more from both original volumes.

Dave Weckl Transcription Books
Weckl released his first drum video, “Back to Basics,” in 1988. He followed it up shortly thereafter with “The Next Step,” Both videos are great. Dave explains his technique and some great concepts for playing and learning to solo. He plays along with his “Contemporary Drummer + One” tunes from the same period and he plays some great solos.

The problem for me at the time I watched these videos was: what the hell was he actually playing? There were no transcriptions included with the original videos. That’s where these two books come in—there is one book that corresponds to each of the two videos. Pretty much everything Dave plays on the videos is transcribed note for note. Even better, the transcriptions were done by the great John Riley, so you know that you can trust their accuracy. 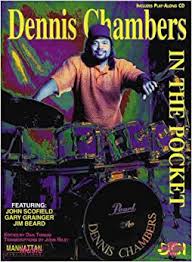 Dennis Chambers Transcription Books
Everything that you just read about the Weckl video transcription books above? Just say “ditto” regarding the two amazing Dennis Chambers videos and corresponding transcription books that came out around the same time. “In The Pocket” and “Serious Moves” were Dennis’ drum video debuts and while Dave was playing along with his “Contemporary Drummer + One” music, Dennis plays live with the John Scofield band line-up from the late ’80s period (“Loud Jazz” and “Blue Matter”).

The grooves that Dennis plays in these videos are amazing and it’s worth the price of admission just for the transcriptions of these. However, Dennis’ soloing is great too, and it’s all transcribed. If you want insight into this seminal period of the playing of Dennis Chambers, with note for note transcriptions (again by the most trust-worthy of all transcribers–John Riley), then these two books are must-haves. Like the Weckl books, these are hard to find, but worth searching for. 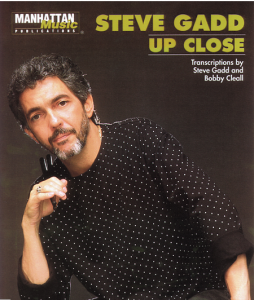 Steve Gadd “Up Close” Transcription Book
Another rarity, this book and its transcriptions were put together with Steve’s help and all of his classic ideas are transcribed here. It’s based on his first drum video, “Up Close.” If you want just one place to learn the majority of Steve’s licks, this is it. Essential.

“Beyond Bop Drumming”
The follow-up to John Riley’s classic, “The Art of Bop Drumming,” this book provides an in-depth look at the techniques of many important modern jazz drummers. With transcriptions of Elvin Jones, Tony Williams and others, and explorations of advanced comping ideas, this is a must-have for any drummer who is delving deeply in jazz. The comping exercises exploring three limb coordination (interaction between the snare, bass and hi-hat) are challenging and musical. The ride cymbal exercises and insight are fantastic. The Elvin Jones and Tony Williams drum solo transcriptions alone are worth the price of admission. Check this one out.

“The UnReel Drum Book”
Known by many as “The Vinnie Book,” and written by Marc Atkinson, this essential work includes transcriptions of every solo that Vinnie Colaiuta plays on the album “Unreel,” by pianist and arranger Randy Waldman. The album consists of new arrangements of film and tv music like “Mannix,” “Leave It To Beaver,” “The Jetsons,” “Hawaii-Five-O” and others. Marc Atkinson’s analysis of Vinnie’s playing is helpful and interesting, but the transcriptions of Vinnie’s drum solos are the real attraction here. There is so much good stuff in here, and it’s all written out for you, note-for-note. I have stolen so much great stuff from this book that I feel like a criminal. 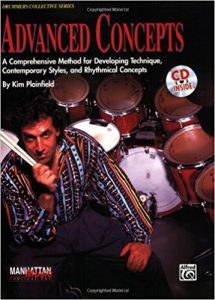 “Advanced Concepts”
The late Kim Plainfield’s book is not as well-known as it should be. Filled to the brim with ideas on rudiments and technique, linear and funk, and modern interpretations of latin grooves, I’ve often gone to the book to seek inspiration for ideas or just to brush up on an idea I may have forgotten. It should definitely be in your drum book library. If you seek to move beyond rock and are not sure where to begin, check this out. 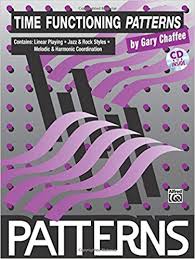 “Time Functioning Patterns”
The classic “Patterns” books by Gary Chaffee are great to shake things up. Of the four volumes published, I personally have found the “Time Functioning” volume to be the most useful to my playing. The other books are full of great information, but I never saw the usefulness for much of them. Since functioning as a time-keeper is our primary job as a drummer, it makes sense that this volume would be of more use.

There are many in-depth exercises on independence in rock/funk and jazz—all of which are very useful. But the real killers here are Gary’s concepts and methods of linear playing. This is the book that introduced me to linear, and the system presented for using math to create grooves has stuck with me. With this system, you can come up with grooves that sound amazing, unique, and much more difficult than they really are. 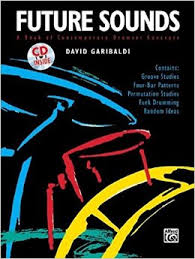 “Future Sounds”
Since we’re on the topic of linear playing, David Garibaldi’s contribution is obviously significant. He’s written multiple books on the topic, and I’ve delved into several, but this one is my favorite. There are many exercises of useful linear grooves. I’ve found the second half of the book, with the “Groove Studies” and “Random Ideas” sections, to be the most applicable to my actual playing. If you’re going to learn to play linear, why not go to Garibaldi, the master? 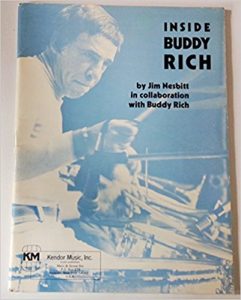 “Inside Buddy Rich”
This rarity by Jim Nesbitt is my favorite instructional book about Buddy Rich’s playing. I bought it after skimming through it in NYC’s Modern Drum Shop in the ’80s and seeing how detailed the transcriptions were. According the book’s credits, it was written in collaboration with Buddy Rich himself, which means a lot. There is also insightful analysis of some of Buddy’s playing concepts. A very cool and detailed book. But, it is very rare. A recent look at Amazon found a copy being offered at more than $400.

“Hands, Grooves and Fills”
Pat Petrillo’s modest little book has a lot of information in it. For my money, the technique portion is the clear winner of the three sections. There is nothing wrong with the rest of the book, but the handy exercises in the technique section are a great way to work on flams, paradiddles and other rudiments. I frequently pull this book out when a student needs to get a little deeper into technique. In particular, Pat’s system for abbreviating rudiments with his own “shorthand” is interesting and helpful, particularly with paradiddles. Worth a look. 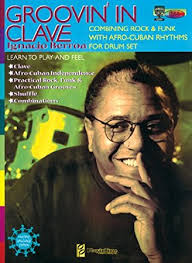 “Groovin’ In Clave”
Ignacio Berroa’s great book introduced me to the idea of developing independence against the clave as a cymbal rhythm (NOT left foot clave). I was attracted to this notion because of my never-ending desire to sound unique. But I also wanted to work on this because it seemed absolutely impossible. Now that I have some facility doing it, I have an increased overall confidence in my ability to learn pretty much ANYTHING. That kind of confidence is really helpful to my overall playing and thinking. So, I can tell you that anything is possible in your playing–really. If you doubt that, just work on this book. By the way, playing clave as a cymbal rhythm while playing funk (or other things) actually sounds very cool, so it meets the practical aspect for my practice time too.

If you read this blog regularly, you’ll know that I’ve gone deeper with this concept on my own. Here are some of my articles:
“Clave Independence Part One”
“Even More Clave Independence”
“Clave Funk Comping” 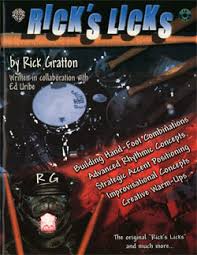 “Rick’s Licks”
Rick Gratton’s book of personal licks and soloing ideas is a great source for injecting new blood into your playing. If you feel uninspired or low on new ideas, “Rick’s Licks” can help you. If I want a new piece of drumming candy, or just want to check out something that I’m sure will inspire me or give me a platform for jumping off into new drumming territory, “Rick’s Licks” usually does the trick. Rick is a legendary educator and many pro drummers have studied with him. Definitely worth having in your drum book library.

That’s it! Go get some drum books!!