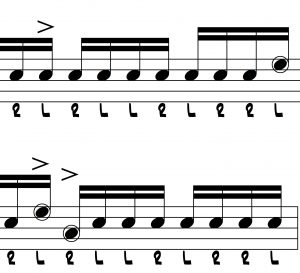 I’ve been digging deeper into inverted paradiddles and the deeper I go, the cooler it gets and the more ideas I come up with. That’s what “deep practice” is all about. Immerse yourself deeply in a particular aspect of your playing or in a concept you’re working on and you’ll see the power of it.  That’s why I’ve been writing about inverted paradiddles so much lately.  Recent posts on the topic :

So, this time, we’re digging deeper into the previous “16 Exercises” post. In the original one, all the exercises were on the snare and the idea was to gain some control over the inverted paradiddle pattern by playing selected accents. The key to making this sound great is to have a large volume difference between the accented and unaccented notes. The unaccented notes should be ghosted.

The step that follows (the point of this post) is to experiment with orchestrating the ideas on different parts of the drum set. The most useful and logical way to do this is to move the accented notes to different sound sources (toms, cymbals etc). That’s what happens on the attached PDF. I simply took the accent patterns from the prior post and moved some of those notes to other drums or cymbals. The choices were made with the desire to create the most musical sounding phrases, so these exercises should all sound very cool if you’re playing them correctly.

A couple of nuances about these exercises:

So, here is the PDF: 16 more exercises to build facility with inverted paradiddles

Print out the PDF, take it to the practice room, and you’ll be surprised at how amazing these sound!  Let me know what you think.

PS – Imagine that you could regularly get these ideas delivered to your email inbox every time we post one. Great drumming vocabulary to raise your drumming level–free. Go do it–just type your mail into the form below, and click that button.