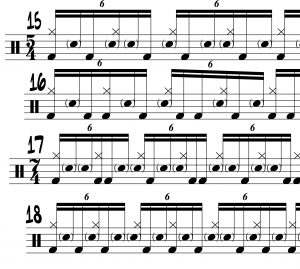 As usual, I’ve been fooling around with lots of ideas. I’m always looking for something new, something different that will help me develop my own unique sound and style as a drummer. That’s the game. In my quest, I recently started working on playing grooves and incorporating 16th note triplets into my ideas while maintaining eighth notes on the hi-hat or ride cymbal.

But wait a minute. So what, right? I mean, lots of people do that, don’t they? Well, yeah, but an occasional couple of fast triplet notes here and there is what you usually hear in that metric while playing grooves.

But what if you had a LOT of freedom with 16th note triplets while you maintained an eighth note pulse with your cymbal hand? What kind of cool stuff could you play then? When I thought about that possibility, I got pretty excited. So, I started working on going deep with this notion. And, hence, the drum exercise worksheet on PDF that you’ll find here: 16th Note Triplet Independence Part 1

Note that there are only three voices notated: bass drum, hi-hat (substitute the ride if you wish), and snare drum. The snare drum notes are represented as ghost notes, but feel free to change the volumes as you see fit. You’ve probably noticed that this stuff looks pretty dense. Yes, but this isn’t the “musicality” part. This worksheet represents the “boot camp” part. This is where we develop the ability to do lots of stuff so that later we can apply that new facility in musical ways. So, bear with me here. I promise the more musical stuff will come. First, work on this. It can’t hurt, and it could lead to you sounding completely different. And that’s part of why we do all this.