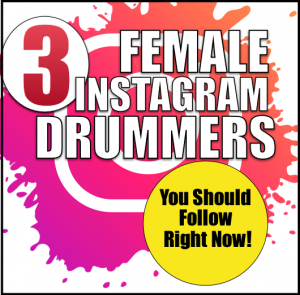 How would you like to check out some new, talented drummers?

I’m going to introduce you to 3 impressive female drummers I’ve stumbled upon on Instagram.

These aren’t the most famous female drummers. But that’s the point. Discovering new drummers is always exciting for me and I’m guessing you might feel the same.

I’ve deliberately stayed away from Cindy Blackman Santana, Terri-Lynne Carrington, and Sheila E because you probably know them already. I wanted to find some drummers who are new to you.

My criteria? I simply picked drummers whose playing I really like. They are ranked based on their number of IG followers. Not that follower counts are the most important thing–they’re not. In fact, there are some Instagram drummers with huge followings who I don’t particularly like. That being said, I had to come up with some criteria for ordering them. So I chose followers to create an order.

Anyway, enough for the introduction. Let’s get into this…

Sarah Thawer is from Toronto. Originally self-taught, she is heavily influenced by Indian music and grew up in a family where music was a big part of the household (her father is a musician).

She started playing at 2 years old and played professionally for the first time at the age of 5.

Studying jazz and music performance in music school (York University), Sarah began to learn more formally accepted techniques. She melds her Indian influences with fusion, jazz, pop and hip-hop (among other genres) and creates a unique sound that reflects her personality and passion.

Based in the UK, Emily has an impressive list of credits including The Darkness, Brian Ferry, Kim Wilde, Howard Jones, Tricky, and others.

She does a lot of remote session recording from her studio (https://emilydrums.com/), working with artists from all over the world. She also puts out educational content that assists drummers who want to do the same. You can check out her course about that here.

In addition, Emily has created The Drum Stem Club (https://emilydrums.com/stemclub/), where her pre-recorded drum tracks are made available–for free–to anybody who wishes to use them. Pretty cool stuff.

Emily’s groove is deep; no wonder she’s played with such great artists.

Madden Klass is a professional NYC drummer and Berklee College of Music student. Her credits include a tour with Mike Doughty (founder of Soul Coughing) and Wheatus (she played in BOTH bands on tour). She also plays in a band called Space Junk is Forever. In Space Junk she has the opportunity to play a little more on the weirder side…the band reminds me of a modern version of Niacin–keyboard driven, funky, proggy, and full of unexpected twists and turns.

She was notably name-checked in Modern Drummer’s podcast by Mike Johnston who said: “she is a great example of a modern drummer.”

Check out this trio of players and let me know what you think. Til next time…