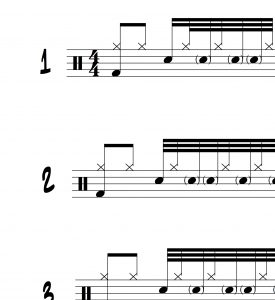 For Nasty Lick #85, we delve into a sticking (RLRLL) and use it to create 32nd note ideas within grooves.

The ideas are based around three voices: hi-hat, snare and bass drum (not surprising since we are going for groove based soloing ideas).

For you certified drum nerds out there, if you know Steve Gadd’s famous original 32nd note groove idea from Tom Scott’s “Dirty Old Man,” or Vinnie Colaiuta’s similar idea from Zappa’s “Dong Work for Yuda,” you’ll know where I’m going with this. For reference, you can check out the Gadd idea here (it’s example #2 on the PDF): 7 Gadd Licks, and the Vinnie idea here: Vinnie on Joe’s Garage.

When you get these up to speed (75 ppm or higher) they really smoke! Try em out. Here’s the PDF: nasty lick 85