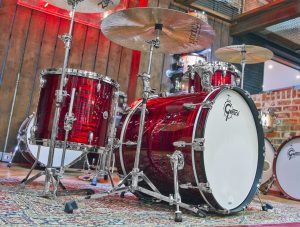 In this edition of “The Thinking Drummer,” we’re going to talk about drum set-ups; specifically, the 4-piece drum kit. Drummers have all sorts of drum set-ups, and generally speaking, I believe that you should use what works best for you. If you like a particular set-up, you sound good on it, and it works for a specific project you’re drumming in, then go for it.

As for me, over time, I’ve gravitated toward a four piece drum set. For the record, my current set-up of choice is a four piece with a 20″ or 22″ bass drum, a 12″ mounted tom and a 14″ floor tom. In addition, I have a hi-hat on my left, two crashes (left and right) and a ride. Of course, I also have a snare. I switch back and forth between a double and single pedal depending on the gig.

But the four piece wasn’t always my go-to set up. As a youngster, I coveted the huge drum kit. My big influences here were Neil Peart and my first drum teacher, NYC drummer, Charlie Davidman. We all know about Neil’s massive kits (and in fact, in an interesting twist of fate, I won Neil’s very first Rush drum kit in Modern Drummer Magazine’s first drum solo contest in 1988). You can read that story HERE.

I loved Neil’s kits, but it was my first drum teacher, Charlie Davidman, who first influenced my love of huge drum sets. Charlie had a massive Ludwig Vistalite kit. As a 13-year-old boy, it was staggering in its hugeness: two 24″ bass drums, two mounted toms, two floor toms. Every drum was clear acrylic. Simply awesome.

First, a practical issue. If I’m touring and I can bring anything I want because the clubs or venues are allowing it (or perhaps requiring it because they have no house drum kit), then almost anything goes. If the situation allows help from a roadie, even better. In that case, perhaps I’d bring a bigger kit. But when I’m playing around NYC in the club scene, 4-piece kits are not really a choice–they’re required. If you are a gigging NYC drummer, you understand this. For those of you who live outside of NYC, I’d actually be interested in hearing what the clubs are like in this regard. But here in NYC, when I go to play in a smaller club, there is a house drum kit and it is always a 4-piece. It’s not a choice. That’s what the club has. So, that’s what I have to play.

This reason alone is enough to justify the decision to focus your playing around a 4-piece drum set. That means your practice should be on the four piece kit. I’ve always believed that we should practice on the same drum set-up/configuration we’re going to play shows on. A simple idea, but an important one.

Second, philosophy. I’ve worshipped at the altar of many great jazz drummers. I’ve listened to, watched, transcribed, and studied many of them. Most of the best traditional jazz drummers played amazingly well on just a four piece kit. There was no lack of creativity due to the smaller sized drum kits. Think of Max Roach, Philly Joe Jones, Elvin Jones, and Buddy Rich (I know, he had a second floor tom, but usually that seemed to actually serve as a shelf for his brushes and extra sticks). These guys, and many others, absolutely killed it on a four piece kit. I’ve heard stories about Philly Joe Jones playing many sessions with no mounted tom at all (only a floor tom), and he always sounded amazing.

Listening to these great jazz drummers made me think, “If these guys could sound that good with only four drums, why can’t I?” I also started to think about efficiency. “If I could sound that good on a small kit, why bother with all the other bells and whistles? Why carry all that stuff around?”

I realized that with technique and creativity, the four piece kit does not have to limit your drumming. In fact, the smaller kit will force you think differently about your playing. How to get more out of less has become an important part of the way I think about my drumming.

Another thing to consider is that playing on a four piece drum set may also get you to think about playing more simply. We probably all agree that “less is more” is often an apt saying when it comes to our drumming. A large drum kit with toms and cymbals everywhere simply begs you to play more. Why should you have a huge drum kit and not hit everything that is part of the set-up? Having a huge kit may very well cause you to add unnecessary fills and fluff to what you play. There is nothing wrong with playing a lot of stuff if the music calls for it. But, more often than not, musicians will favor a great groove over a lot of flash and fills. That’s the drummer you want to be….the one who makes everything feel good.

Size does matter. But when it comes to drum sets, it’s possible that sometimes, smaller is better. 😉