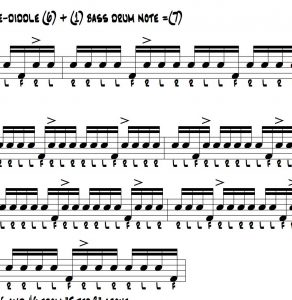 Have you ever found yourself sick of the same old drum fills you’ve been playing? Want to find something new? Try using this system. It’s a process that will yield interesting ideas that you would not have just made up on the spot. Some of these ideas will sound awesome. Some will not sound so good. It’s up to you to decide. Discard the crappy ones and keep the great ones.

I’m going to show you the steps and then we’ll try the process to make up an idea that I’ll put in the PDF for this lesson.

2) Pick a pattern to apply to the chosen metric
You could create a hand/foot pattern, or you could apply some rudimental sticking or some combination of both. For example, you could apply paradiddle-diddles or inverted paradiddles to the metric. You could also apply a hand/foot idea like “4 up/1 down” (ie. 4 notes with the hands and then one with your bass drum).

3) Write it down/Write it out until it resolves
Write the pattern out and repeat it until it resolves back to one. This will allow you to see how it plays out across more than one bar of time. Then, you’ll be able to extract the most useful chunk of the idea and apply the pattern in your playing. You need to be able to go back and forth between the fill and your groove playing and this step will allow you to see how to do that based on the mechanics of the fill in different positions in the measure. The example fill (“Fill Experiment”) we create below will make this step more clear.

4) Pick A Phrase
Just pick the part of what you wrote out in #3 above that works for you.

5) Orchestrate
What drums or cymbals will you use? Decide where to play the pattern on the kit.

Let’s Try It / “The Fill Experiment”
OK, now let’s try this out! I’m going to make up some new stuff right here on the spot. Let see how this “Fill Experiment” goes.

First…here’s the PDF that will illustrate exactly what the steps below lay out for you: 5 Steps To Great Drum Fills PDF

Fill Experiment #1
Let’s say that you are in a prog band and you are given a two bar drum break. You want to play something awesome and new there. The tempo is bpm=120. At this tempo, sixteenth notes might sound great, so let’s start there.

1) Pick a Metric
OK, we agree on sixteenth notes.

2) Apply a Pattern
In this example, I’ve chosen a 7 note idea: one right-handed paradiddle-diddle (6 notes) = rlrrll PLUS one bass drum note. You see how this starts to play out by looking on the PDF in #2.

By the way, I know that I’ve picked something complicated here. Just realize that you can use this method and choose patterns that are much simpler if you wish.

3) Write it Out
On the PDF, #3 reveals that it takes seven measures of repeating this pattern as 16th notes until it resolves back to where we started.

4) Pick a Phrase
Of the 7 measures we wrote out on the PDF in #3 above, I really like how the 5th and 6th measures play out. The stickings work for me to be able to get in and out of the fill and move between it and the groove. The rhythms of the phrase seem really different and interesting.

5) Orchestrate
I’ve messed with the accents a little bit, using the single strokes in the paradiddle-diddle to hit the toms. I’ll play the doubles quietly, which is why they are notated as ghost notes. There are many other possibilities in orchestrating this, I just picked what I did because it appeals to me.

Let’s Try It
Let’s both try it. As of publishing this, I have not actually played it on the drums, but I have a feeling I’m going to like it. Let me know what you think. We’ll circle back later and compare notes.

Try making up some new stuff of your own using this process and let me know how it works for you.