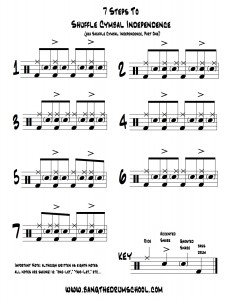 The thing is, as great as that shuffle sounds, when I was backing a soloist, I felt stuck. I wanted to do something more to lift things up and propel the music forward. But I didn’t want to play a lot of fills or disturb the groove in order to get that “lift.”

I started to think that it would sound great if I could vary the ride cymbal pattern just like you do in Jazz, but while maintaining the left hand pattern and bass drum as the foundation.

But I couldn’t do it.

Hence, these 7 exercises to develop the necessary independence.

I’m going to start working on these…