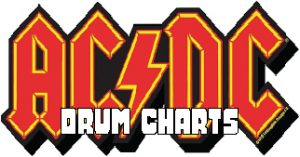 Recently I was asked to play an AC/DC tribute show. In order to learn the songs quickly, I made drum charts on finale for all the tunes. I road tested the charts in rehearsals and on the gig, and they’re spot on with the original recordings.

These are not note-for-note transcriptions, but they’re definitely more than just drum charts. The grooves are written out and the fills are very close to being exact. Want to learn some AC/DC songs? Have at it. If you teach, these could be great for some of your students.

Below is a list of the songs. Click on the song name to go to the PDF.

Included are drum charts for :
Hell’s Bells
Back In Black
I Put The Finger On You
Let’s Get It Up
Shake Your Foundations
Rock and Roll Ain’t Noise Pollution
Who Made Who
Evil Walks
Shoot To Thrill