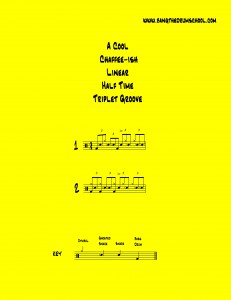 This past week I had the pleasure of playing on a jazz gig with a great vibraphonist, Sean McCaul. He asked me to play some things that I had back in my memory banks but hadn’t had to use in a while. One of them was this groove.

This is a groove that I came up with years ago when I was spending some time with Gary Chaffee’s fabulous book, “Patterns: Time Functioning.”

I wanted to play something that sounded afro cuban 6/8 ish, but more modern, with a paradiddle funk linear kind of feel. This is what I came up with. I was listening to a lot of Dennis Chambers and Steve Gadd at the time, so it hopefully will sound a little fusion-esque.

Here is the PDF: A Cool Chaffee Ish Linear Half Time Groove

Please take this groove and use it as you see fit!