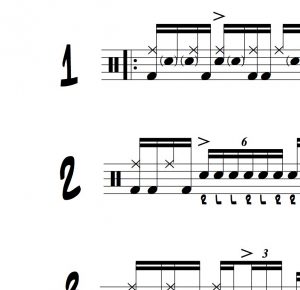 NOTE: There is another sticking that I recently discovered for Nasty Lick #109. Both this original and the new one work well, but I like the new one better. You can see the post and the link to the PDF with the revised sticking here: Philly Joe Jones Nasty Drum Lick #109 w Revised Sticking

Recently, I was working with a student on her jazz soloing and I rediscovered this great Philly Joe Jones idea. I got so excited by it that I immediately starting practicing after her lesson was over.

I wanted to see how I could use the lick in the kind of music I’m playing these days, which is more funk/rock/fusion. In other words, I’m not playing a lot of traditional jazz these days, but I like the idea—what can I do?

This Philly Joe Jones idea is a three beat triplet lick using a rudimental sticking. In the PDF I’m offering to you below, you’ll find the transcription of the idea as Philly Joe played it as well as 1) an example of how Philly Joe might have used it in a four bar break, and 2) some ideas I had for applying it in music I’m playing. Here’s the link to download the PDF: Philly Joe Jones Nasty Drum Lick #109 Original Sticking

Print out the PDF and take it to your practice session. Let me know what you think by leaving a comment on this post.

I’ll leave you with this video of Philly Joe taking a solo on a 1969 gig with Thelonious Monk. You’ll hear him play this idea, aka “Nasty Lick 109,” several times beginning around :12 and :22 seconds into the video.