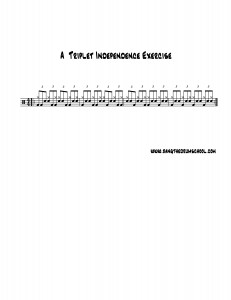 This week I’ve been practicing, as I have been for months now, heel-down doubles with the bass drum. It’s been driving me crazy. But, I’m on the right track. The Perfect Balance Pedal has helped a lot.

Sometimes, when I’m working on some technical skill like this, I need some way to keep things fresh. So, I came up with this.

It comes from an idea that I heard Vinnie Colaiuta play on the track “Ben Casey” from the “Unreel” album by Randy Waldman. It’s during the solo, and it is very fast, but Vinnie plays this combination at the peak of the solo.

I just took the pattern he plays between the snare and bass drum, subtracted the ride notes he played, and added the jazz ride cymbal pattern on top for this exercise. Try it.