We know it sounds crazy. But this is one hundred percent true.

In fact, it was the very first drum solo contest that MD ever ran in their hallowed pages. Since he had been practicing quite a bit and studying rabidly at DRUMMER’s COLLECTIVE at the time, Mark went into a friend’s recording studio to make his entry for the contest. It was submitted on cassette.

A few months later, Mark received a letter from Neil Peart informing him that he was one of the winners. YES! NEIL PEART! RUSH’s legendary drummer was the judge of the contest and several of his drum sets were the prizes. Mark’s drum solo was chosen by Neil as one of the three winners from over 1700 global contest entries. Neil gave Mark his Slingerland drum kit–aka “Chromey”–the one Neil played on the recording “2112” as well as on other seminal RUSH albums. You can scroll to the bottom of this page to see the letter that Neil sent to Mark.

You can hear Mark’s solo in the You Tube clip below…start at 4:21

So, what is the point?


The point is that anything is possible. You just have to DO. If you want to play drums at a high level, you need good information and a good teacher and a lot of time in the practice room doing hard work.

You can achieve any dream, but you have to have the courage to go after it and the focus to spend lots of time practicing your craft.


Yes, you can make money with your art. But you probably won’t make any if you’re not any good. You could say this story is about a fluke, or about luck, but we believe it is about opportunity meeting preparation, and that creates luck every time.

At BANG! our job is to help you with that preparation. We think we have the credentials to back up our assertion that we can help you get good at the drums….if nothing else, this story is about that….dreams of being a good drummer and achieving them.

Come study drums with us.

Here is the letter Neil sent to Mark—you can see Neil’s signature at the bottom of the second page—signed personally by him. You can click on either page to enlarge it. 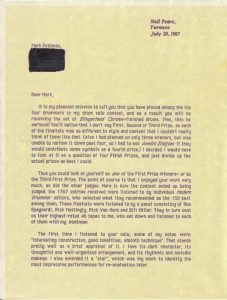 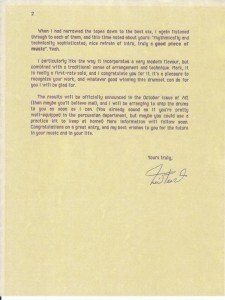