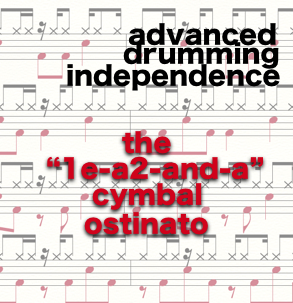 One of the magical things about playing a musical instrument is that the possibilities are endless. That certainly seems to be true when it comes to drumming. Developing independence against a cymbal pattern that goes over the barline is just one idea that I’ve been working on that makes me feel that drumming and music have no limits.

The idea presented here comes from Dave DiCenso, who is very fluent with the cymbal ostinato that we’re dealing with in this article. Here it is below:

The reason for presenting the above in a three bar segment is to demonstrate how the pattern resolves back to beat one. You’ll notice that if you repeat those three bars, you’ll have an endless repeating and flowing pattern.

Here is the PDF: “1e-a2-and-a” Cymbal Independence Part One

I have been working on this for a while and I think it sounds really cool and different. I’ll add a video shortly so you can see and hear it.

By the way, DiCenso also has great fluency with this pattern with the addition of the hi-hat placed in between the cymbal notes. If you play the hi-hat with your left foot after each set of two cymbal notes, you’ll have a continuous pattern of 16th notes. Imagine being able to have independence with that! Dave does. I’ve addressed this in another blog post, and you can check that out here: A New Kind of Rock Drumming Independence, Part 1

Let me know what you think by leaving comments!