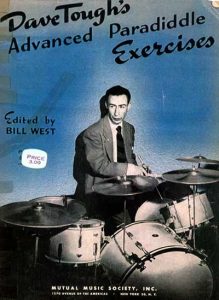 Dave Tough, a drummer who was active from the 20’s through the 40’s, worked with a who’s who of swing bands including Artie Shaw and Woody Herman. Unlike his much more famous contemporaries (Krupa, Rich and Roach), Tough didn’t like to take drum solos, so it might seem surprising that this book is part of his legacy.

Foreward
I have designed this book for the advanced student who has a knowledge of the rudiments of drumming. The book deals with the three forms of paradiddles — single, double and triple, each form represented and mixed in each of the two hundred exercises.

This will assure him of improved coordination, technical development and fluency of sticking in his practical day-to-day playing. It will be invaluable to the individual, while practising these exercises, to play two or four foot beats to the bar.

To my knowledge, this is the only book published that is devoted entirely to varied paradiddle exercises.

In conclusion, I have found that too little time is devoted to the practising of varied combinations of paradiddles, and it is my sincere hope that this book will prove to be an aid in acquiring a well-rounded system of drumming.
DAVE TOUGH

Your hands will thank you.