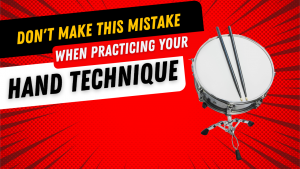 Here’s something I’ve been talking about a lot lately. And it’s because it’s critically important. And it is overlooked in a major way, particularly among beginners.

One of the things I’ve noticed with some students, particularly beginners, is that they think that if they just put in a lot of hours practicing, their hands are just going to magically transform.

I’ve seen this often with the idea of working on one’s “weaker hand.”

There seems to be this belief that spending time on the weaker hand will bring it up to speed with the stronger one. Sometimes I get the feeling that some students believe that it’s all about the amount of time that is being spent working on developing that weaker hand (most often one’s left hand).

But there is a problem with that thinking.

If you want to watch my video on this, you can check out that out below, or if not, just keep reading.

If one doesn’t spend that practice time mindfully; paying attention to the details of the stroke; the physicality and feeling of it; the way the mechanics are looking; how the strokes feel and sound….and have a model in one’s head of what it’s supposed to look like and sound like and feel like….

Without having that kind of mindful method to your practicing, all of that time that you spend working on that weaker hand is very likely going to be a waste.

Even further; beyond it just being a waste, it could actually be detrimental to your playing and technique.

If you spend a lot of time working on your weaker hand and you don’t have a goal; a visual image in mind of what your strokes are supposed to look like, you’re just acting as if you’re blind.

You need to have that image in mind and then you need to be actively working to make the mechanics of the weaker hand MATCH that image by making physical changes that move the strokes toward the “ideal” strokes.

If the above is not what you’re doing, then the time spent practicing can do more harm than good. What can wind up happening is you can make that hand worse by ingraining some incorrect movement or simply reinforcing an already sub optimal motion into that hand’s muscle memory.

So keep this idea in mind.

Time at your practice pad isn’t going to solve your technique problems.

But time spent in a mindful way working towards a goal movement/stroke and making the changes required to move the mechanics towards that goal will help you improve.

Please consider this before “blindly” pounding out some exercises that you believe will help your hands improve.

As one of my heroes used to write, “Nuff ‘Said!”