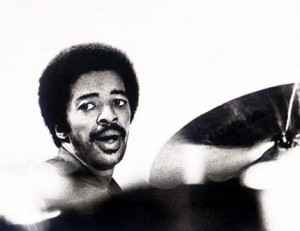 A while back I posted the footage of Tony Williams killing it from a Japanese video on You Tube that can be found by simply searching for “Awesome Tony Footage.” It is Tony in all his bombastic glory. He’s playing with Ron Carter, Dizzy Gillespe, Herbie Hancock and others, and he takes eight eights in the video, followed by an extended solo.

The “low hanging fruit” of the eights is the 7th one. It is considerably less dense than anything else he plays during the performance. But for me, it is proof of the notion that one can play simple but appropriate vocabulary when soloing and sound amazing doing so. I love this break so much that I memorized the entire eight shortly after stumbling on the video. The 7th Eight can be found at 2:10 in the video, which is embedded below. Check it out.

It truly is sublime–reminiscent of the solo Tony took on the studio version of “7 Steps To Heaven.” Not fancy, but pure jazz drumming language through and though. One of the only Tony Williams solos that could be called easy; yet it sounds amazing. Hope you like it. And yes, I’m working on the rest of it too.