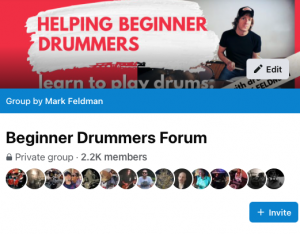 The Group
The only place like it online–The Beginner Drummers Forum–is a Facebook group where beginners can go and ask any questions without fear of being teased or called a “noob.” It’s a safe space for learning and asking for critique of your playing. There truly is no other place like it online.

Join us by applying here: https://www.facebook.com/groups/beginnerdrummers

You’ll have to answer some membership questions in order to join, but they’re not extensive and they’re not intrusive.

If you want to, when you apply to join the group, you can also join a beginning drummer email list that sends out weekly emails that are always helpful to beginners.

The Backstory
I was sitting in my practice room and thinking about my drum students–who they were, why they came to my school, and what they were looking for.

It was pretty clear that the majority of them were beginners.

That made me happy.

That was what I had hoped would happen.

I founded BANG! The Drum School in 2009 in the basement of a rehearsal studio in Williamsburg, Brooklyn. I knew right away that I wanted to teach beginners for several reasons.

Reason #1: The Famous Music School Debacle
The first reason was as a direct result of my visit to a very prominent music college several months earlier. A friend of mine was an associate professor there (we’re no longer friends, but that is a story for a different time), and I had taken a trip to visit him.

While I was there, my friend took me around and introduced me to many of the percussion department instructors there. Some of them were pretty famous drummers and meeting those folks was kind of a thrill.

But there was one professor there (no, I won’t name him) who was such a condescending ass**** that I was left feeling disgusted.

It only took that one person to ruin my day. He was incredibly arrogant and clearly judging my worthiness as a drummer. It still makes me angry even now, more than ten years later.

Interestingly, he was nowhere near as famous or as accomplished as the drummers I mentioned who were “name” guys. The so-called “name” drummers were really nice and gave me no funny vibe at all.

When I got back to New York, I thought about my trip. That professor made me feel so unwelcome that it made me realize something important about the business I was about to start.

As George Costanza famously said, “I will do the opposite!”

I decided that my school would literally be the most welcoming and friendly place around.

When people are just starting something new, it’s no surprise that they could be a little anxious. I recalled what my feelings were when I first began learning to play the drums. I was insecure and not sure of my ability or the way forward. I needed a caring teacher (luckily, I had one).

It became really important to me that my school be accessible and welcoming to beginners.

Besides the horrible music school visit and experience, there was another reason that I felt compelled to focus on beginners.

Reason #2: The Drum Teachers in NY Didn’t Care
When I had a look around at the websites and advertisements of the people offering drum lessons in New York City, I noticed that they were all doing the same thing.

They were all offering everything for everybody. All levels of students, all styles. No focus. No niche.

And certainly, none of them had any focus on beginners.

That seemed pretty strange to me. Why would that be the case? It didn’t make any sense to me at all.

Until I thought about it some more.

And then it dawned on me.

Have you ever taken a lesson with a teacher who doesn’t listen to you? Who doesn’t let you play at all? Who tells you about all of the stuff he or she can do and never shows it to you slow enough so that you can actually understand what they’re doing?

If the answer is “no,” count yourself as lucky.

Unfortunately of me, I have had several teachers like that.

I have a theory about why these teachers are like this.

Their teaching is more of an ego trip for them. It’s not about being helpful. They want to receive adulation rather than to transfer important and helpful knowledge and skill.

By the way, it should be obvious, but if you ever come across a teacher like this, run for the hills!

But this leads back to the reason why a beginner-centric focus is so rare.

For these people–and there are many of them–teaching beginners is no fun. What IS fun for them is teaching really advanced crazy stuff that is full of technique and polyrhythms. And I teach some of that stuff too. But I teach it only to people who are interested in learning it; not to beginners who, for the most part, couldn’t care less about that stuff.

As it turns out, it was good that most of the drum teachers in NY didn’t care about beginners, because I did, and they all started to come to my school.

The Online Version of the Beginner Drummer Focus
Now, fast-forward to the pandemic. This catastrophic really did change everything for me and my business.

One of the things that seemed to be true about the impact of COVID on businesses was that if you were well positioned for the future, the pandemic rewarded you. Just look at Zoom or Amazon, for example.

If you were not well positioned for the future, there were crushing repercussions of the negative variety. That’s what I experienced. My in-person teaching business got decimated.

While I was thinking about what to do, I started to explore what was going on in the online space.

The Beginner Drummers Forum was Born
Not that long before the pandemic began, I had started a forum on Facebook so the beginner drummers had a place to talk and get advice. I started to focus more on growing that group and investing some time into it. I wanted to see if there really was a need for it.

It turns out there was.

And just like with BANG! The Drum School, I made sure that I was welcoming and friendly and that everyone in the group was that way as well.

In fact, anyone who was snarky or dismissive got banned immediately. That’s how I maintain the integrity of the group.

The forum also serves as a place where people who are taking my online course, “Drumming for Absolute Beginners” can ask questions about the course or post videos for critique.

And amazingly, it appears that The Beginner Drummers Forum is one-of-a-kind. It’s the only beginner-centric discussion place online that I know of.

So, if you want a place to go where you can get help, join us in the Beginner Drummers Forum. You can sign up here: https://www.facebook.com/groups/beginnerdrummers

By the way, you can check out some other beginner drummer oriented content here:

Beginners: Focus on these 5 Things