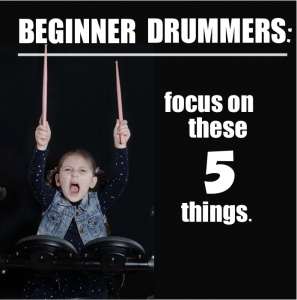 Achieving success in any endeavor requires focus and learning the drums is no different. Focusing on the right things–especially at the beginning–is truly important. Focus is something that I’ve read about and written about frequently because I sometimes struggle with it myself.

There are many drumming ideas, techniques, and skills that excite me. And therein lies a problem. I’ve been guilty of sometimes jumping around too much from one thing to another. And that results in not really getting anywhere with any of those things.

I’ve noticed that beginner drummers sometimes suffer from this too. It’s partially because the internet presents too much information and there are tons of videos that just “touch” on this or that.

In order to combat that problem, I want to offer 5 key topics that beginner drummers need to focus on in order to get good. Going deep in each of these areas will really help beginners to consistently move forward and keep getting better.

1) Technique
Technique is sometimes overlooked or glossed over because it’s very difficult and it takes a lot of work and time to acquire. But it’s extremely important because developing solid technique in your hands and feet is what will make you sound good behind the drums.

If you don’t know how to hold the sticks or make them bounce or any of the other details of technique, you’ll have a hard time getting a good sound out of any drums that you play.

Technique is also important because it gives you options. I’ve always believed that having more options is better than less.

2) Independence
This refers to the way that skilled drummers are able play patterns that repeat with one or two limbs and then play varying rhythms with other limbs simultaneously. The original rhythm does not change–therin lies the independence part.

This really is essential because without it, you won’t be able to play beats (aka grooves). And beats are your bread and butter skill; drummers are time-keepers and without beats, you’re toast (see what I did there?)

3) Vocabulary
One of the very best analogies for learning drumming and music, in general, is language.

Vocabulary is required. You should learn a bunch of rhythmic ideas that have been played before you and successfully incorporated into the style of music you want to play. This is why drummers steal drum fills and beats off of records (or Spotify playlists).

In drumming, vocabulary is mostly about fills and beats.

Remember memorizing all those words so you could speak that new language you were learning? It works the same way with drumming.

And speaking of language…

4) Rhythmic Notation
This is the written portion of the drumming language we’re learning. There is a misconception that learning to read music is very difficult. It’s not.

Learning to read rhythmic notation is important because it will make almost everything else drumming-related much easier to learn. Trying to learn to play drums by ear is not particularly efficient.

As you get better, you’ll come up with cool ideas behind the drums that you’ll want to remember so you can work on them later. Learning to read and write music will allow you to do that. There also is a vast amount of drumming education literature that exists that you can’t take advantage of if you can’t read.

5) Groove
Being able to play your beats well, with precision, and with a solid pulse that doesn’t speed up or slow down is what is behind “groove.”

This is what people you make music with will probably remember most.

If you can make the music feel good–and generally speaking, drummers have the power to do this–people will want to play with you. If your beat playing is on par, you’ll make people in your band and in the audience tap their feet. And that’s kind of the main point of being a drummer.

So, your groove is a big priority.

Focus on these five things instead of bouncing around from topic to topic and I promise that you’ll be putting yourself on the right track. That’s all for now!

—–
One more thing. Back to the notion of focus. One of the best books I’ve read about focus is called Essentialism, which I wrote about elsewhere in this blog: Essentialism