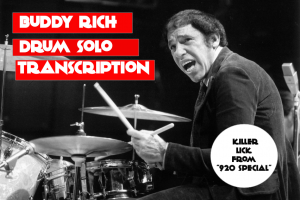 Buddy was a master technician.  But he was also extremely musical.

I had an argument/debate the other day with someone about technique.  The person I was debating was arguing that focusing on technique could rob one of creativity and musicality.  I strongly disagree with that sentiment.  Technique is a means to an end.  How one uses it is a different matter entirely.

As far as I’m concerned, the more technique one has, the better.  It just allows for more possibilities.  Technique provides choices.

As I get off my soapbox, let’s move on to the subject at hand–a killer lick that Buddy plays on the 1958 recording of “920 Special.”  Do you know this tune?  It’s classic Buddy.  The solo he takes is entirely on the snare drum.  And it KILLS.  And it’s totally musical.

Check out the tune and solo below.

The PDF with the lick is here: Buddy Rich Lick from “920 Special”

Note that I’ve taken the lick and written it out until it resolves back to one so you can mess with it in your practice room more easily.

Try it out and let me know how it goes…