Posts in category: Drum Off

Luis Burgos Jr Will Win the 2015 Guitar Center Drum Off 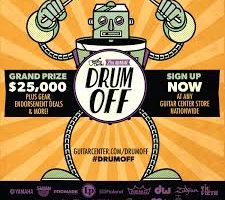 Prediction: Luis Burgos Jr will win this year’s Guitar Center Drum Off competition. I saw Luis twice during this year’s contest, which concludes with the Grand Finals on January 16th, 2016, in Los Angeles. FYI, Luis competed via the North East region. I was at the Quarter Final round at NYC’s Union Square store on […]

Dawud “D-Mile” Aasiya-Bey of Lake Elsinore,CA defeated Jonathan Burks of Little Rock, Arkansas, Shariq Tucker from the Bronx, Hilario Bell from Miami and Josiah Maddox of Chicago to be crowned the champion of Guitar Center’s 2013 Drum Off. The battle began in September of 2013 when over 5,000 drummers competed at the store level across […]

Here is the second of a bunch of ideas I used in this year’s Drum Off competition at Guitar Center. The transcription shows exactly what I played during the four bar solo I took using this concept. “Idea Two” is closely related to “Idea One” which you can check out here: Drum Off Idea 1 […]