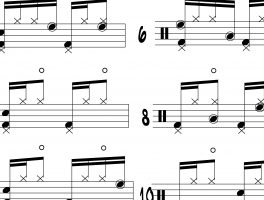 In this post, you’ll find a PDF to help you work on a really cool and useful ostinato that you can use in your drum solos. I call it “The Left Hand E-And” because the left hand plays the middle two 16th note figures on the hi-hat, while the left foot plays quarter notes by […]

Part of my job with this blog is to be a curator. In that role, I want to share things with you that I think are excellent, inspiring and push the limits of the art form of drumming. Here is one such example. Dave DiCenso. Do you know him? Perhaps his most well known gig […]

“Indian Time Zones” appears on Warren Cuccurullo’s 1996 album, “Thanks To Frank.” The tune is in 5/4 and Vinnie Colaiuta takes an eight bar drum solo on the track. My favorite part of the solo is the 2nd half. A transcription of those last four bars is presented here. The 2nd half of the solo […]