BANG! The Drum School (www.bangthedrumschool.com) announced that Chris Carhart, the drummer for Phantogram, would be teaching as part of the school’s new Artists In Residence program. The new program is meant to bring the teaching expertise of internationally known drummers to the curriculum of drum lessons offered at BANG’s NYC studios.

According to BANG’s founder, drummer Mark Feldman: “Chris Carhart is a fantastic drummer. He plays with great feel, emotion and precision. When I first met Chris, I was struck by his warmth, friendliness and passion for drumming. Here is someone who is playing with one of the world’s biggest bands; he could be resting when he’s not on the road. But not Chris–he is driven to teach and spread the gospel of drumming when he’s not touring. That’s the kind of passion about drumming that aligns with the spirit of BANG! The Drum School. I am very excited that he is going to be a part of the Artists In Residence program.” 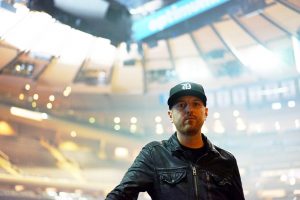 Playing with PHANTOGRAM, one of the world’s leading bands that combine pop, rock and electronic music, Chris has a deep knowledge of many new drumming skills that must be mastered in today’s technology heavy music scene. For example, Chris can share his approaches to mixing programming and sampling with live acoustic drums or learning to play with sequencers. In addition, Chris is experienced with teaching children and beginners, so those with more modest goals are welcome.

Chris Carhart will be available immediately through the end of October.

The story behind the creation of BANG! The Drum School is quite interesting in and of itself.

BANG! The Drum School was founded in 2009 by drummer Mark Feldman (www.markfeldman.org), using funds he generated through selling the famed drum kit, “Chromey,” which was owned and played by Rush’s legendary Neil Peart on his first albums and tours with Rush, the famed progressive rock band. Mark earned possession of the drum kit when he entered Modern Drummer magazine’s first drum solo contest, judged by Mr. Peart. Three of Peart’s drum kits were given away to the winners, and Mark’s drum solo earned him “Chromey,” the massive Slingerland drum kit that can been seen on the cover of Rush’s first live album, “All The World’s A Stage.”

Since it’s modest beginnings in the basement of a garage in Brooklyn, BANG! The Drum School has become NYC’s #1 drum teaching studio, with two beautifully renovated drum studios in midtown Manhattan, just outside of Times Square.

For more information about studying with Chris Carhart or about the school itself, please contact BANG! The Drum School.