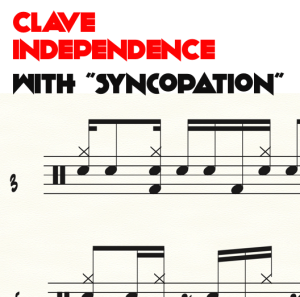 Regular readers of this blog know that I’ve been writing exercises for developing independence with clave as a cymbal pattern for years now.

Playing clave as a cymbal pattern and playing against it freely is extremely difficult at first. In fact, it seemed almost unattainable to me.

Similarly, when Jim Chapin’s classic book, “Advanced Techniques for the Modern Drummer” was first published, many professional drummers looked at the book’s jazz ride cymbal independence studies as ridiculously hard or even impossible.

But they’re not, are they? Now, it’s common to be able to play the classic jazz ride cymbal pattern and have deep independence with it.

So, initially, I was intrigued by the challenge. It also sounds great. I had the idea that it would be great to be able to solo against it. It’s also something that only a handful of known players seem to be able to do—El Negro and Dafnis Prieto come to mind. But not many more.

So, it’s been a worthy pursuit. And it has musical applications. That is one of the most important considerations when practicing something–at least for me.

In this post, I offer you a “translation” of page 38 of Ted Reed’s “Syncopation” as 16th notes and with the clave rhythm superimposed on top. I’ve also added a Tumbao-derived bass drum pattern I like that is appropriate for this style.

Here’s the PDF with the exercises: Clave Independence with “Syncopation” Part 1

Finally, here’s a taste of what I’ve written on the topic already; elsewhere in this blog.

I’ve written many more posts on the path to clave independence: simply search the blog for “clave” and you’ll find a lot of material.