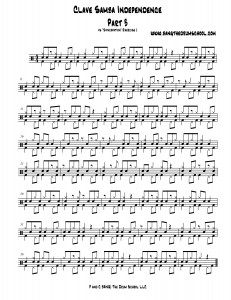 The mission: play clave freely with one’s right hand, play samba with your feet, and play anything you wish with your left hand.

So far, in Parts 1 and 2, we’ve explored playing common figures against the above patterns and tried out some musical examples.

You can check out those two steps here:

For Part 3, I thought about the method I used to develop other similar types of independence. The answer? Ted Reed! Ted Reed’s “Syncopation” has been used by drummers for decades to learn to read, to work on technique and to work on independence.

I used it to work on developing samba independence and baion independence, among other things.

Part 3’s worksheet takes the first “Syncopation” Exercise (there are nine in the book) and uses it as source material to play with the left hand. I’ve merely laid out all of the other parts of the puzzle for you: the clave pattern and the bass drum pattern are all written out so you can see how everything lines up. Personally, I needed to do this for myself so I could work everything out.

Give it a whirl. Download the PDF here: Clave Samba Independence Part 3