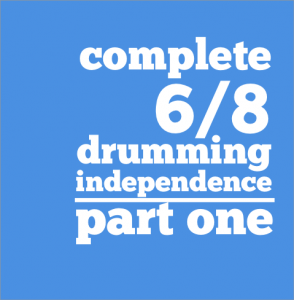 Recently, it’s come to my attention that there is a shortage of materials for drummers to work on playing in 6/8. It’s come up for me when working on things for myself as well as with students.

I wanted to introduce a student to playing in 6/8 and I really couldn’t find anything in-depth on independence in that time feel.

And therein lies the birth of this blog post. The attached PDF contains 42 measures of 6/8 time playing that will give you a serious independence workout.

I’m not saying it’s a workout because the exercises are difficult. Rather, there is a depth to the exercises because they are based on Gary Chaffee ideas that I stumbled upon when working out of “Patterns: Time Functioning.”

Then, combine these two sets of possibilities to create a third set of exercises that yields every possible combination of bass drum patterns.

That is what these two pages of exercises contain. Note that these exercises deal in the eighth note grid only. There could be many more possibilities if we were to expand and include the sixteenth note grid. We’ll save that for later.

Here is the PDF: Six Eight Independence Part One