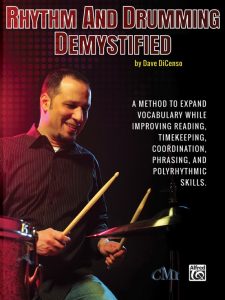 If you are serious about your drumming–really serious–you need to check out this book. It may very well become a classic. It certainly deserves to become one. If you were to take some of the ideas of Gary Chester’s “New Breed” and expand them exponentially, you’d have some idea of what RADD is all about.

Chester’s book focuses on playing grooves within the 16th note grid and using your voice as an additional limb. DiCenso adds every other rhythmic grid and adds rudiments and vocabulary for fills and soloing in addition to grooves. The most exciting thing is that you can take almost any vocabulary that you use and that is not in the book and adapt it to the systems in the book. Doing that will allow you to take your own ideas and expand your own understanding and ability to use them in your playing.

The most obvious similarity between “RADD” and “New Breed” is the addition of one’s voice as an additional limb in the mix of a drummer’s independence. DiCenso includes much more detail than Chester did on how to do this in RADD. The application possibilities are far greater than in Chesters’ book.

To get a better idea of the what the book is all about, here’s the description found on Alfred Publishing’s website: “The lessons in Rhythm and Drumming Demystified (R.A.D.D.) utilize a process of adapting the rudiments—and the countless variations and grooves they spawn—to the framework of five systems of common rhythmic figures, as a means to increase one’s control and flexibility with any sticking or time-feel. The book also contains a groundbreaking system for using the voice to develop one’s “internal clock.” By using this system, drummers can improve their groove by learning to generate time with their mind and allow their body to simply be a conduit between their perception of the time and its manifestation on the drumset.”

Now, have a look at Dave demonstrating some 32nd note ideas from the book. Pretty cool stuff.

It is. However, RADD lays out a system for you to use in order to get there. The methodology of “Rhythm and Drumming Demystified” will lead you towards those abilities if you are willing to spend the practice time to get there. Dave DiCenso is one of the best drummers on the planet. Go and check out some more of his playing. I’m guessing that after you do, you’ll trust Dave to help you in your drumming endeavors. I do.