A few months ago I bought the DrumDial, a device that was created to help drummers more easily tune their drums.

Tuning is an important skill for a drummer. Often overlooked, but clearly important. A great player with a not so great sound on their instrument translates into a so-so player. So it follows that you need to care about your sound as well as your playing.

But drum tuning seems a bit mysterious to many. In the beginning it certainly was to me. For melodic instruments, it all seems much simpler. A G is a G. A D is a D. Very specific. Not so for us drummers. There are no real notes to tune to as there are with melodic instruments (some will debate this and say that tuning drums to specific melodic pitches is both possible and desirable, but I have never been a fan of tuning my drums this way). So, just how does one learn to tune drums? 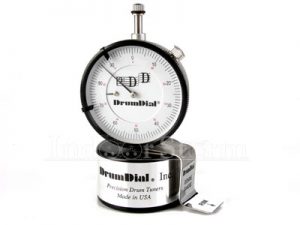 The first place to turn is a trusted drummer friend or teacher.  I learned by having a teacher show me.   But there are many other sources of information including books, videos and the web.  Below are just two to get you started:

So, over time, I’ve become good at tuning drums, but I figure, there’s always room for improvement, right? Hence, my decision to buy the DrumDial.

The idea behind the DrumDial is logical: match the tension of each lug on the drum and you should get the basis of a good clear tone. This is what any drummer who knows how to tune generally does anyway. But without the DrumDial, we do it by ear.

Simply tapping the stick on the head an inch or so inside of a particular lug and matching that sound lug by lug is a common method of tuning.

But, the promise of the DrumDial is that you can get those tensions so perfectly even that your resulting sound could be that much better. Simply get the tension numbers, as measured by the DrumDial, to match to a specific tension, and you’re good to go.

It didn’t pay out for me. I spent a bunch of time tweaking the tensions on various drums to get them perfect by using he DrumDial, always following the instructions provided, and often the result was less than I had hoped for.

Frankly, I was able to make the drums sound better when tuning by ear. I also was able to tune much more quickly with out the Drum Dial.

Sorry, I love new drumming related devices. I really do, But this one was not a winner. Not recommended. Save yourself some time and trust your ears.