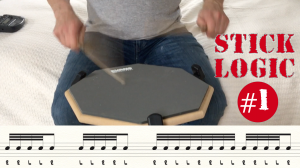 Here’s the first in a new series–“Stick Logic”–that focuses on hand technique and rudiments. This first installment features a little exercise I’ve been doing called “Twenty-Three.”

There is a PDF of the exercise with all the stickings and notation that you can find here: Stick Logic #1

If you know what “Twenty-Three” means, leave a comment.