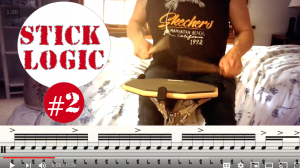 In this series, I’m going to get through all the rudiments, but do so by giving you études/musical pieces to work on.

I always found it more interesting to work on pieces rather than just patterns. For example, the great Charlie Wilcoxen book, Modern Rudimental Swing Solos was always fun for me because the technique was within a musical context. My hope for this series is that those of you who want to work on hand technique will find that these pieces in “Stick Logic” help you develop both your technique and your musicality in a fun way. And in the process, you’ll learn all of your rudiments.

The piece offered here is called “The Paradiddle-Diddle March” and it should give you some interesting ideas on how to phrase these two rudiments as 32nd notes.

You can download the PDF of the exercise with all the stickings and notation here: Stick Logic #2

Now, let’s look at the video so you can hear what the exercise sounds like up to speed (90 bpm).

Alright, that’s it for this installment. Remember that you don’t have to play this 90 out of the gate. The smart way to proceed is to work on this stuff slowly and cleanly with loose, soft hands. OK, have at it!!