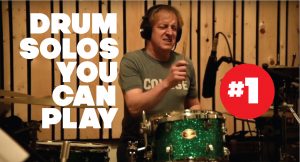 Drummers sometimes ask, “how do I play a drum solo?”

The honest answer is that you get better at playing drum solos by actually playing them. Now, before you get pissed off at my seemingly obvious answer, here is how you can do that. You need some source material to begin. That’s what I”m providing you with in this series–a bunch of note for note solos that you can work on in order to develop your soloing abilities.

In my case, in order to begin working on my soloing, my teachers always had me transcribe the solos I liked from the drummers I liked and then learn them. That’s just the beginning of it. But it’s a very solid way to begin.

When you learn other drummers’ drum solos, you learn vocabulary and structure. You start to understand how drummers put that vocabulary together and make music. You will also discover some of your weaknesses. For example, when I worked on the drum solos of my heroes, I would sometimes find that I couldn’t play the ideas as fast as the drummer who originally played them. In addition, it sometimes just didn’t sound right even if I could play it fast enough.

Those are usually deficiencies in technique. Practice will correct that over time.

In order to make this process easier for you, I decided to start writing a series of 8 bar solos that are offered to you with all the details including the stickings. I think of this series kind of like a modern drum set player’s version of Wilcoxin’s “The All-American Drummer: 150 Rudimental Solos.”

Below is a link to the PDF with a complete, note-for-note transcription, including stickings. Print that out, and then, check out the video, which presents more details on soloing and the solo played both slow and fast. Here is the PDF: Drum Solos You Can Play #1