At first, you may look at this and just say, “why?”

I know. I get it. But I have begun to find use for this idea. Bear with me a moment, OK?

We’ve been taught since the day we begin drumming that we should be able to play lots of figures with our limbs while maintaining an eighth note cymbal rhythm. Lots of figures that don’t include eighth note triplets. I have never seen this explored in any drumming literature and I don’t think I’ve heard anyone play this way. Why is that?

As I thought about the “why,” I started to feel that there wasn’t any good reason for this stuff being ignored. I also could imagine this facility yielding some pretty cool sounding stuff. 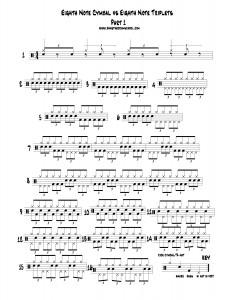 As I’ve messed with this notion, I’ve discovered that there is some use for it. Mixing eighth note triplets in with other ideas that are more commonly played can actually sound musical if played tastefully.

So, I’ve decided to explore further. This worksheet will give you some ideas on how to begin working on gaining the facility to play this way. It’s just a start, but a significant one.

To get started, you need to work on the essence of three against two, which is the very first exercise on the sheet. It’s presented in the simplest form (quarter notes vs quarter note triplets) so you can start to understand the rhythm of overlapping these figures.

I would suggest working on exercise one for a long time, and then substituting your bass drum and hi hat foot for the snare drum. As you get more used to how this feels and sounds, you can start to speed it up. As you do, you’ll start to get the feeling of eighth notes vs eighth note triplets.

Then, start working on the exercises.

After you’ve messed with the exercises for a while, try improvising with adding a few eighth note triplets here and there as you play the more conventional things you can already play vs the eighth note cymbal pulse.

Here’s the PDF for you to take into the practice room: eighth note cymbal vs eighth note triplets part one

More to come as I get deeper into this…