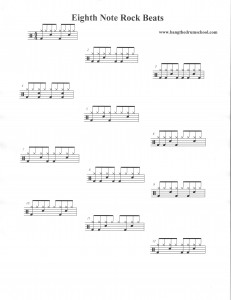 Here’s a worksheet we’ve been using with students to get them started on the path of becoming a rock drummer. The sheet is available as a pdf file for download by clicking on this link:

“Muscle through” these patterns very slowly at first by just literally doing what the notation says to do. For example, with beat #1, which is the beat in the upper most left hand corner of the sheet as pictured, if you simply do the following, you will be playing the beat:

3) play the hi hat with your right hand and the snare drum with your left hand simultaneously. (say “two”)

6) repeat the above over and over, and space the notes evenly, and you’ll be playing the beat. start very slowly and practice the pattern until it becomes easy to play. then you can gradually speed up.

7) use this same process for all the beats on the page.

You will need to go deeper than this, but for a complete beginner, this is a really good way to get started. Have a go at this and if you have any questions about how to work through it, feel free to to ask.

Have fun with it.