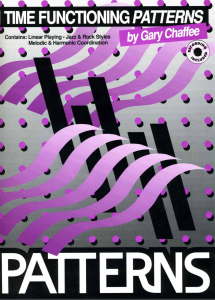 Gary Chaffee is one of the world’s most influential drum educators. His students include a dazzling array of well-knowns, including Vinnie Colaiuta, Jonathan Mover, JR Robinson, Joey Kramer, Todd Sucherman, Steve Smith and many others. His 4 book “Patterns” series is probably the work he is best known for.

I have worked out of many of his books, but the one that has always been the most useful to me has been “Patterns: Time Functioning.” In it, Chaffee lays out some very efficient ways to work on independence in several styles.

Recently, I decided that I needed more variety in the cymbal patterns I was playing comfortably. The framework that I play within most often (like many of you) is the sixteenth note grid in 4/4 with two and four on the snare. I decided that I was relying too much on just eighth notes on the cymbal.

I picked a few different cymbal patterns to start to develop and I went straight to “Time Functioning” to begin working on them.

Here’s why. It truly has the most efficient method of developing independence. Here’s how it works.

Section One of the book is labeled “Cymbal Ostinato Time Feels.” This is where the sixteenth note grid/pop/rock feel lives in this book. In this section, Gary lays out every possible figure within the sixteenth note grid that can come before beat two or four. Then he lays out every possible figure that can come after two or four. To simplify things everything is written in 2/4.

But that’s not all. Next, he combines these two ideas to give you every possible combination of these figures. And he does this in only four pages of exercises. The cymbal patterns are left out. It’s up to you to superimpose the pattern you want to work on.

The idea of having every possible combination under my belt is appealing to me. It means I can do anything against the particular cymbal pattern I’m working on. That builds confidence. And when you have confidence, you play better. I like that.

I also like to build skills that are useful. Before I work on something, I ask myself, “will I ever use this in my playing?” Time playing is the majority of what we do as drummers, so developing different aspects of that is clearly useful. I’ve found this book to be the most efficient way to work on useful independence. Add all of this up and the result is that “Time Functioning” is a very important book.

After the four pages with different combinations around two and four on the snare, there is a section designed to give you general freedom without relying on two and four. I love that section too–it’s very extensive–and it will take your independence to yet another higher level.

I haven’t been working that much on my jazz independence lately, but there is an entire section taking a similar approach devoted to that style as well. There is also a very interesting system for coming up with linear ideas that make up the third part of the book. I have worked in both of these sections with good results.

The only thing I would caution is that you don’t rely only on this book to work on your time playing skills. “Time Functioning” will give you a lot of raw skill to maneuver within the time feels you work to develop, but it won’t help you with your musicality. Luckily, there are other books and other activities that can help you with that.

In the jazz style, John Riley’s “The Art of Bop Drumming” and “Beyond Bop Drumming” explore time playing with comping patterns that are culled from listening to music. They include grooves that are inspired or simply transcribed from the great jazz drummers. So, there is real musical vocabulary there. Vocabulary that if you use, will make you sound more versed in the real vocabulary of the genre.

For the funk style, Mike Adamo’s “The Breakbeat Bible” is just one of the books that can serve a similar purpose for learning musical grooves that are based on real playing. For your funk playing, you’ll want to work on examples that are based on the vocabulary appropriate for the genre. “Breakbeat” is great for that.

These aren’t the only books that will help you with musicality, but they’re a start.

And let’s not forget probably the most important thing you should be doing: listening to music, seeing people play live and playing with other people yourself. Combine all this with the raw independence you’ll get from Chaffee’s “Time Functioning” and you’ll be in business.