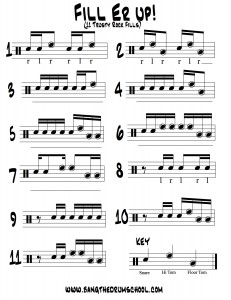 Here’s a bunch of simple but effective rock drum fills you can use right away.

All of the fills involve alternating single strokes and they all begin with the right hand and alternate throughout (r l r l etc), EXCEPT where a different sticking is indicated on the work sheet.

These are straight up hands only fills that use only three drums: snare, hi tom and floor tom.

I use many of these fills in my playing and they work great.

For practice purposes, work on the fill itself first, then insert it into a two measure phrase, where the first measure and a half is a rock beat. Begin the fill on beat “3” of the second measure and crash on “1” of the following measure, and continue this loop to make sure that you keep the flow between the groove and the fill. The only exceptions to this are with numbers 8 to 11. These four fills begin on the “and” of three, so you will play the beat for one eighth note longer before beginning the fill. Try them at different tempos, from 80 bpm to 160 bpm.

Here’s the PDF: Fill Er Up