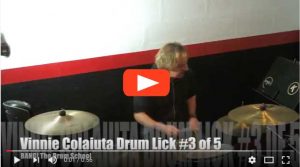 I’m trying to remember exactly where I first heard Vinnie play this lick. Honestly, I’m not 100% certain, but it may be from Karizma’s “Document.” This third of a series of five Vinnie drum fills is another classic Vinnie idea. As usual, it’s something that you might not have thought of yourself, and very interesting rhythmically. It’s based on 16th notes, it’s all hands and moves around the kit with accents in unexpected places. It’s Killer.

There’s a video of me playing the idea in various ways below. First, I play the two measure version pretty fast; I play #4 and then I play #3 from the PDF. The only difference between 3 and 4 is the placement of the last two accented notes in beat four of the second measure. In #4 they’re played on the snare, and in #3 they’re played on the toms.

Check out the video and PDF together and you should be able to get this idea together…it’s a cool one! Comments or questions are welcomed.