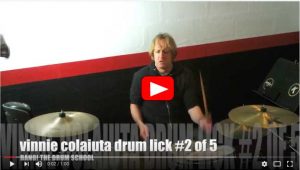 Here we go! This is a great Vinnie lick. I first heard it on the song “Get A Grip” from the Tom Scott album “Flashpoint,” and I’ve heard many pro drummers use it; no doubt they stole it, just like I did (and just like YOU are about to) off that record. Go to around 2:35 on the track to hear the original. At the end of the drum break on “Get A Grip” you’ll hear this nine note idea…that’s the chunk of Vinnie’s fill that I’ve heard a lot of drummers play. Let’s dig in.

First, download the PDF with a transcription of the lick and everything I play in the video right here: PDF: Five Killer Vinnie Colaiuta Drum Licks Part Two

OK, got it? Now check out the video below. First, I play the idea very slowly a bunch of times. Then I speed it up and finally, I play a groove and improvise a bunch of different ways of playing this lick (aka “Nasty Lick #93”). Every single thing I play in the video is transcribed note-for-note on the PDF, so check it out while you watch the video.

There isn’t much more to say. Watch the video and learn the PDF, and you’ll have a great new killer lick in your arsenal. Let me know how it goes and feel free to ask questions.