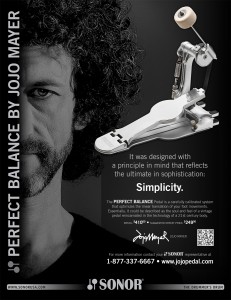 Now that I’ve had this pedal for a couple of weeks, I wanted to share some more of my thoughts.

If you are a jazzer, and if you’ve been struggling with heel down double strokes on your bass drum pedal, this is the answer.

You are still going to have to practice your ass off to get your heel down doubles where you want them. But this pedal will make it significantly easier. As I said in the last article, this pedal feels like butter!

Now, I don’t want to be a name dropper, so I am not going to mention his name, but I ran into a well-known jazz drummer in the lobby of my practice space who was coming from a lesson with teaching legend Michael Carvin. We hadn’t seen each other for a while and I invited him up to my studio to check out the pedal. He really liked it as well….and he noted that it felt significantly different, and was easier to play than other pedals he had checked out. He mentioned that he was currently playing the DW 9000, and he seemed to like the Sonor pedal better than that one. He commented on how easy it was to feather the bass drum with it. “It’s like I’m not even doing anything,” he said.

Here’s the “bad” news. This is not an all around pedal. It is not going to work for your heel up, Bonham-esque rock playing. I tried it at a rehearsal with my rock band MANCIE and I did not feel comfortable. It was like trying to use scalpel to do the job you needed to use an ax for. The pedal is just too sensitive to do the job in rock. I tried making adjustments to the pedal to see if I could make it work in the rock context, but to no avail.

I tightened the spring tension significantly and I adjusted the angle of the beater, but it never felt right.

You’ll notice that I put the word bad, above, in quotation marks. There’s a reason for that. I’ve come to believe that it’s OK to use different gear for different musical situations. I don’t have a problem having a jazz pedal and a rock pedal. I have a jazz kit and a rock kit. I have jazz sticks and rock sticks. So, why is this a problem? It’s not! I am ecstatic to have a pedal that makes my jazz playing better and easier, and the Sonor Perfect Balance Pedal has done that.

So, I’m happy. It’s a great pedal for more precise and less athletic playing. Travis won’t like it, but Kenny Washington might.