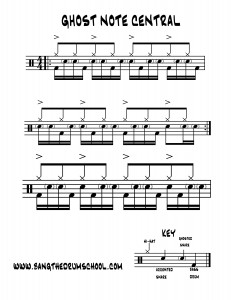 This week, a student asked me for some exercises to work on ghost notes. Ghost notes, if you aren’t familiar with them, are very quiet notes played on the snare drum. They give your grooves some peaks and valleys and help make things extra funky. The key to making your beats sound great when adding these ghosted notes is to make them super quiet, while your accented notes are, of course, significantly louder.

These two exercises will help you work on your ghost notes and your independence. The hi-hat should be played with accented quarter notes, using Moeller technique for maximum groove potential.

The first exercise is a two measure phrase with only one accented snare drum—beat “four” of the second measure. The second exercise is a one measure beat with “two” and “four” accented.

Here’s the PDF for you: Ghost Note Central