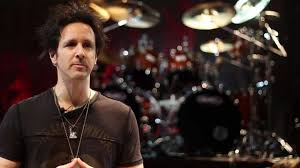 Glen Sobel is a beast of a drummer. Based in L.A., Glen is best known as the drummer for Alice Cooper and The Hollywood Vampires. He also won the Guitar Center Drum-Off early in the contest’s history.

Anyone who knows me and my drumming preferences knows that I am a big fan.

Why? He’s got power, chops, creative ideas AND groove. I love his solos. I stumbled upon this solo (below) on YouTube. There are tons of great ideas here, but for this post, I focused on the 32nd note run he does from 1:54 to 1:58. It’s blistering. The tempo is about 116.

Here is the solo:

Use YouTube’s playback speed control to slow down the video and you’ll more easily see and hear what Glen is doing. I’ve transcribed the section from 1:54 to 1:58 for you and you can download it here: Glen Sobel 32nd Note Fill Transcription.

Something to note. To play these ideas cleanly and up to speed, a double bass drum pedal is highly recommended. Glen makes great use of the double pedal in his playing. Here’s an interesting nuance. Glen usually plays two notes in a row on the bass drum by leading with his left foot rather than his right. You’ll see that reflected in the notation, but if you don’t feel comfortable playing that way (I don’t), never fear–it’s perfectly acceptable to reverse the order of those bass drum notes to Right and then Left.

PS – Imagine that you could regularly get cool stuff like what you found in this post delivered to your email inbox. Great drumming vocabulary to raise your drumming level–free. Go do it–just type your email addy into the form below, and click that button.