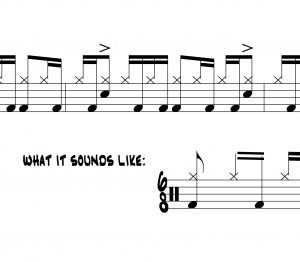 In my playing with my band LEVEL5, I’ve been experimenting with ways to add tension and help build the drama or intensity of my other band members’ solos. One way I’ve found to do this is to play something that is rhythmically interesting and “in the pocket” but that is still “off kilter.”

Superimposing 6/8 on top of 4/4 is a solution to this problem that has worked for me. It sounds a little weird, so the listener may not know what is going on. But it keeps the original metric of the subdivisions intact (in this case, eighth notes and sixteenth notes), and that stops the “deception” from being completely jarring. It’s just weird enough to build that tension and intensity and it won’t cause a train wreck.

Here is the PDF that includes three ideas using this concept: Groove Deception 2

The three measure example shown for each idea is in 4/4 but will make it sound like you’re playing 6/8. Each idea is shown from beginning to resolution. If you play all three measures, you’ll get back to exactly where you started and you can play those three measures as long as you want–making it sound as if you’re playing continuously in six. However, I usually don’t stick with the deception more than a few measures.

The deception from the PDF that I’ve used the most is example #1, which is based on something I’ve heard Vinnie Colaiuta do (I know, big surprise) and loved. Another nuance of how I use this idea is that I often start this deception on the third measure of the example. Doing that was just a creative decision–I like the way it sounds. Try starting the ideas on the third measure and see if you like it.

Finally, please note that this is not for your pop band! Groove Deceptions can get you fired, so use them with care!

Try these out, and let me know your thoughts.