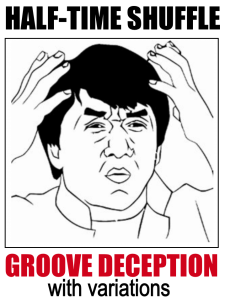 I recently saw Dennis Chambers play with Oz Noy and Wayne Krantz. During one of Dennis’ drum solos, he started playing grooves that seemed to be in a completely different tempo than what Oz and the rest of the band were vamping on.

You’ve probably heard this kind of drumming before. The idea has many names: “metric modulations,” “rhythmic illusions” or as I like to call them, “groove deceptions.”

When Dennis does this, it has extra impact because he varies what he is playing so it sounds more natural. In other words, he’s not playing a static modulated groove, but he changes the bass drum pattern or the accents on the snare or makes other changes.

This makes the illusion even more complete.

Now, Dennis doesn’t read music, so I have no idea how he can do what he does when he time shifts in that way. But, for us mere mortals, the PDF here will give you a method to vary a deception so that it sounds more natural.

I picked one of my favorite ideas to experiment with and I offer it to you here in this post. It’s a way of playing using a dotted eighth note pattern that makes it sound like you are playing a slowed-down half time shuffle.

And the worksheet has five variations to enhance the deception.

In order to pull this off, you’ll be playing sixteenth notes that form a three-beat phrase that is rhythmically designed to sound like a two-beat 16th note triplet phrase (this will be clear when you look at the PDF). So, if you want to keep your place inside of the actual time of the tune you’re playing, you’ll have to count.

To make it sound like you’re varying the groove, simply put different examples from the PDF next to each other. That’s all there is to it. Besides keeping your place…

Give it a try. Let me know how it goes.

Go to top
PS – Imagine that you could regularly get these kind of drumming ideas delivered to your email inbox every time we post one. Great drumming vocabulary to raise your drumming level–free. Go do it–just type your email addy into the form below, and click that button.