Introduction | How The Hell Do I Learn To Play Drum Solos?
For a long time, learning how to play drum solos always seemed elusive to me. How does one learn to do this? How do you get all these cool drumming ideas to come out of your body and flow? And how do you get to the level where you can just improvise and the stuff you play just sounds good?

Let’s assume you have strong technique and your time is solid. You’re in good shape with those two skills under your belt. But there’s more to learning to solo than that. 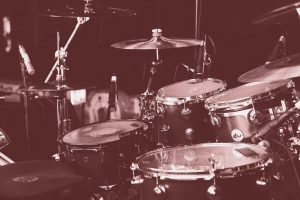 I always thought that the most important first step to soloing was having something to say. You can’t speak if you don’t have vocabulary, right? So, for me, that seems like the next important step. Technique? Check. Time feel and steady time? Check. Vocabulary? Uhhhhh…. OK… let’s dig into that.

But first, let’s talk about my first discovery about how to learn to develop some vocabulary and then put it together.

Weckl’s Continuous Triplet Exercise
The first hint I got about how to gather vocabulary in pursuit of being able to solo came from Dave Weckl’s great video from the 80s, “The Next Step.” In one section of that video, Weckl explains and demonstrates an exercise where he plays 16th note triplets continuously and uses many different hand/foot combinations (Foot-Right-Left; Right-Left-Foot-Foot, etc) while he does that.

I’ve written about this video before, and you can check that out here: Soloing in Triplets from Weckl’s “The Next Step”

And there is another clue in Weckl’s exercise on how to work on this stuff. Clearly, Weckl organized at least some of his practice by focusing on one subdivision at a time. And that makes sense to me. Why not organize your practice by separating the different metrics you are likely to use? Knock them off one by one before putting them together. That makes sense to me.

Let’s dig a little deeper into this exercise. When Weckl blows through the exericise in the video, he’s putting together vocabulary he already knows. But there are some steps before that. You have to decide what vocabulary you like. Finding the vocabulary you like enough to commit to memory is a entirely different process of its own.

Finding the Vocabulary You Like
You’ll have to transcribe. Learn some solos of the drummers whose soloing you love. Then, take the ideas from the solo you like and mess around with them. How can you make them different? See if you can create new stuff that you think sounds cool but that is inspired by the drummers you like.

You can also just make up stuff. For example, you could just decide to explore five note grouping ideas applied to 16th note triplets or any other metric. You can take a rudiment you like and substitute a bass drum or two for other notes in the pattern.

And the above begs the question: do I have to have strong technique? Do I have to learn the rudiments? I vote, “yes.” Technique and rudiments will only help you if you are seeking to be able to play drum solos. Philly Joe Jones used rudiments extensively in his solos. Technique is important, no doubt.

Great. But how do you put yourself in a position where everything that comes out during the solo sounds so good? When Weckl does that exercise in the video, everything he plays sounds great.

Well, some of that is technique. But the rest of it is that he has vocabulary he likes and in the video, he’s just putting it together in different ways.

Organizing Your Vocabulary
Philly Joe Jones–one of jazz drumming’s most highly regarded soloists–kept a notebook with his “best stuff” in it. (More on that here: “The Notebook” ) He was very organized about his playing and you can hear a consistency of vocabulary in Philly Joe’s drum solos.

If you have a goal in mind to sound a certain way when you solo, then keeping a notebook or otherwise writing down your chosen vocabulary simply makes sense. You need to organize your favorite vocabulary so you can begin to commit it to memory.

The Analogy of Learning a Language
We’re already using the word vocabulary, so it shouldn’t be a surprise that many musicians liken the ability to improvise freely with the idea of learning any spoken language. The more I’ve considered this, the more I find it an apt way of thinking about it.

I would like to be able to play drums just like I speak. When we speak to each other, we thoughtlessly put our words together to form sentences that communicate what we want to convey. Being able to play music as easily as we can speak is a worthy goal. And it makes sense because it works in a similar fashion.

When I studied French in middle school, I recall the frequent distribution of “vocabulary sheets.” Each sheet had a list of French words and their English meanings organized around a certain topic. For example, one worksheet might have included only words associated with eating and food.

Then what? Memorize the words and their meanings and construct sentences that use them. Write those sentences. Speak them. Simple, right? If you want to learn a language, you have to memorize lists of words that help you communicate different types of ideas.

Now let’s apply this concept to our goal of being able to improvise drum solos.

“Drum Solo Sequences”
Practicing ideas that you’ve decided you want to be able to play is important. You need the practice to get the muscle memory to execute the idea. But, what about recalling it? Remember studying for an exam? Didn’t you actually work on recall? If there is a concept that is one of the possible topics for an exam, you study in such a way that you can recall the idea so you can write about it or answer some question about it correctly on the test. You don’t just have to know something. You have to recall it.  In college, when studying for an exam, I’d have someone quiz me on the stuff I thought I needed to know and that was how I worked on recalling it.

I believe that we need to do some analogous work with our drumming vocabulary. It won’t do any good to have the facility to play something if your mind can not recall it or pull it out of your memory banks. That’s why I’m exploring the use of what I call “Drum Solo Sequences.”

A “Drum Solo Sequence” is a worksheet that has some of the ideas you want to use in your soloing written down on it. They should be written specifically such that you would be happy if that specific idea came out of you during an improvised solo.

When you repeatedly work on that page, you are recalling the idea every time you play the sheet. You could also memorize the sheet.  If you memorize, or go through the sheet enough times, I believe you will be able to recall that idea easily whenever you wish. And that’s the goal here. To program yourself so that you can play certain things at will.

I got the idea to practice this way from a great drummer who is based in Atlanta named Justin Scott. He uses this idea and calls his written material a “practice chain.” He told me that he has used this method and he feels that it works.  Check him out on Instagram–he’s an amazing drummer.

Give it a Try
Do you think what I’ve described here makes sense? Let me know. I’m using these concepts and I’m committing a significant amount of time to practice to see if they work. I’ll keep you apprised, but if you decide to try them out, I want to hear how they work for you.