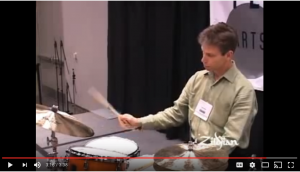 RIDE CYMBAL TECHNIQUE: MY OBSESSION
Since I’ve been obsessed with jazz ride cymbal technique for the better part of a year, I thought I should write and talk about the little journey I’ve been taking. This year alone I spent several hundred hours working on this technique (at least 400). I’m embarrassed to mention how many hours I spent prior to this year working on ride cymbal technique using a method that I now believe is absolutely not the best method.

DISCOVERY OF A WEAKNESS
Early this year, sometime in mid to late January 2010, I took a lesson with John Riley who pointed out to me that my jazz ride cymbal technique could use some improvement. I could play tempos ranging from slow to about 300 bpm, but i was working too hard, I was using a lot of Moeller technique (which I now believe is unnecessary and even incorrect) and although deep down I suspected that something might be missing from my method, I wasn’t sure what.

THE PROBLEM WITH MY ORIGINAL RIDE TECHNIQUE
As I mentioned, John zeroed in immediately on my ride cymbal technique as a place for improvement. What was I doing wrong? Well, let me explain to you what my technique was like when we met.

My original technique was based on french grip, with my fulcrum clearly between my pointer finger and thumb. The fulcrum was as loose as it could be to allow the stick to bounce. I was using a wrist throw to launch the stick towards the cymbal on beats two and four, and the ensuing two notes of the ride cymbal pattern (the skip note and then the following downbeat) were created solely from the bouncing of the stick following the wrist throw. It actually sounded pretty good. But there was a lack of control and there was a strong accent on two and four. There was also an upper limit to how fast I could go. There were tracks I heard that were faster than 300 bpm and no matter how hard I worked, I could not get this technique to get me past quarter note equals 300. Plus, I was working pretty hard to achieve 300 bpm….swinging my arm using Moeller….pumping away….something was not right.

The control issue was an important limitation to this inferior technique. Because I relied completely on bounce for the skip note and the following downbeat within the ride pattern, I was a slave to gravity. This was particularly an issue at slower or mid tempos. At those tempos, the phrase is king. If the triplet phrase is not perfect, the pattern will not swing as hard as it should. Well, how could I control the phrase properly? Impossible with the old method.

In addition, the quarter note pulse, so important for the feel of the music, gets undermined by the strength of the two and four accents that are generated by the wrist throw. JR pointed out to me that the method we’re about to examine below takes care of all of these problems: control of the phrase, quarter note pulse and speed.

HOW THE CORRECT TECHNIQUE WORKS
If you’ve heard Tony Williams, Buddy Rich, Art Taylor or many other great jazz drummers blaze at speeds faster than 300 bpm you’ve no doubt thought, “how the hell can they play that fast!!!???” I know I did. OK, well, here’s the answer. Check out this video below. This is the technique John showed me and it works. I promise you it works.

See how it works? Doesn’t it make sense? I sure wish I knew about this technique earlier. It took me most of my practice time this year to really get this together. I completely threw my old method out the window and started from scratch using this technique.

TIPS ON GETTING THIS TECHNIQUE TO WORK FOR YOU
Here are several thoughts to help you on your way to mastering this technique.

PRACTICE BOTH SLOW AND FAST.
As you probably know, at faster tempos, the ride pattern will flatten out and be played more like eighth notes than like triplets. Therefore if you spend too much time practicing only really fast….because you are obsessed with the speed at which you heard your idols play the ride cymbal (this is where I was at: obsessed with being able to blaze!!), your triplet phrase could suffer.

Let me explain. Below the “blazing” tempos, the ride cymbal swings when it is played as a triplet phrase. But you need to practice that phrase to lock it in and be able to play it thoughtlessly. I spent too much time practicing the fast tempos and my slower tempo pattern suffered because of it. I remember going back to see John and although I had made real progress with the technique and the correct motion, fulcrum (or lack of fulcrum….there really is no fulcrum in this method) etc…. the mechanics were on their way, but the triplet phrase had become tight at the slower tempos because I had spent so much time working on speed and not enough time working on the correct, swinging triplet feeling phrase that you need at the mid to slower tempos. Don’t make my mistake! Spend equal amounts of time working on both slow/mid and fast tempos.

BE VERY PATIENT
Of course, spend as much time practicing as you can, but progress will be made over time through systematic and consistent practice. Stay really relaxed, make sure your arm hangs loosely from your shoulder and stick with it. Remember, it took me a year to get this where I wanted to get it. (OK, well, I’m still working on it, but I can play 320 bpm for extended periods now and that should get me pretty far…..I still am struggling to play 350 consistently and for extended periods….I can play it, but I can’t keep it clean and hold it for 15 minutes……)

USE YOUR FINGERS AS MUCH AS POSSIBLE
One thing that took me a while to understand is that your BACK fingers….your ring finger and your pinky….are strong! Use all of your fingers in conjunction with each other and don’t ignore these back fingers…..this will help you greatly.

YOU DON’T NEED MOELLER FOR THIS TECHNIQUE
I was under the impression that you need Moeller to get a fast ride cymbal beat to blaze. Look at the video. Do you see any Moeller here? I don’t! You don’t need it. It’s all wrist and fingers and a little arm.

THERE IS NO TRICK!
There is no trick and there is no mental game to play to help you with this. Nothing but hard work using the correct technique will get you where you want to go on this. Just work. Plain old hard work.

The last thing I want to say is that if you are serious about moving forward as a jazz drummer, go see John Riley. He is the best teacher I’ve ever had. Not to mention he is a wonderful player. If you haven’t heard him play please do so asap….sick.

That’s about all I have on this right now. I will keep you posted as I progress….the next monster I have to conquer is the blazing five note patterns a la Tony W. I’ll let you know how that goes!
I hope this is helpful. If you have any questions please feel free to ask. You can get this to work for you….just go for it.