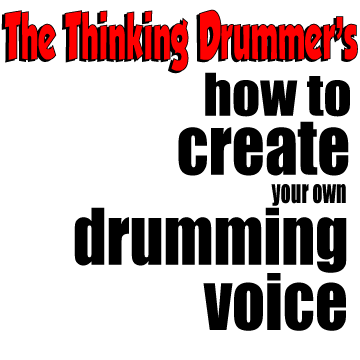 I’ve always believed that the ultimate achievement for any musician is to have their own voice or sound on their instrument. For many ambitious musicians, that notion represents the Holy Grail of musicianship.

Steve Gadd, Tony Williams, Elvin Jones, and Keith Carlock are just a few of the drummers who have reached that apex. Can you listen to a few bars of music and on that basis alone know who a particular drummer is?

Yes? That is the hallmark of a musician who has successfully developed their own unique voice.

The question is: how does one get there?

One must have a passion for the instrument that is extraordinarily deep. The work involved is too overwhelming for all but the most dedicated. If you speak to musicians who have reached this high level of achievement, they will tell you that they listened to many musicians and delved deeply into those who they felt passionate about. They practiced thousands of hours. But was it chore? Perhaps sometimes. But mostly, no. The passion drove the work.

Part of the work is to explore the vocabulary of great drummers before you. You don’t have to learn what everyone played. That would simply be impossible. Just pick those who inspire you. That is part of what makes this journey fun. You get to pick which drummers will influence your playing.

Exploring in this journey is not cursory. It means transcribing and dissecting. Just listening to a few tracks is not enough. One needs to become deeply immersed. I believe that learning the time playing and soloing of the artists you choose to explore is important. Perhaps you choose the time playing of several drummers and the soloing of others. Pick and choose that which excites you.

Beyond the specific ideas you might have heard your heroes play, there will be concepts that influence you. For example, Billy Cobham was one of the first players to play open handed. That had a great influence conceptually on many other drummers. You can bet that Simon Phillips was heavily influenced by Billy, but he took the concept and did new things with it.

Look for some other big picture drumming concepts that you can build your unique playing voice on.

Then, you’ll have to learn to play these ideas yourself. You’ll get a deep understanding by doing this. You’ll start to hear new things. You’ll keep some of it. You’ll discard some of it.

At some point, you will have to make a conscious decision to go down your own road. If you don’t do this, you will never make it to the unique place of having your own sound. This is crucial.

Once you give yourself permission to do this, gates will open. You’ll take ideas that your idols played and alter them. There are many ways to do this. A few are:

You will find some of these new ways of playing things sound good and some don’t. That’s OK. That’s the process. You’ll keep some stuff and discard other stuff.

Putting it Together Your Way

You’ll also have to figure our how to integrate your ideas into your playing in a way that makes sense. This will take a bunch of work on it’s own. The work to do this is very important. Practice improvising your new ideas. If you can’t improvise them into your practice playing, then they probably won’t come out in your performances when you want them to.

The sound of your instrument

What about tuning, drum sizes, cymbal choices, and technique? All of these directly influence how you sound so you have to think about these things too. Are you going to have a massive kit or a small one? Double bass or single? Coated Ambassadors or Pinstripes? Muffling or open? Traditional grip vs matched? Do you rely on doubles or singles? Each of these choices is important.

This is the most exciting journey of all. Embrace it and enjoy it.