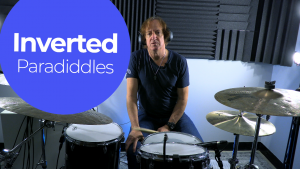 I have been using Inverted Paradiddles in my playing for a long time. I’m pretty sure that I first became aware of them in the late ’80s when I was studying with Rick Considine at Drummer’s Collective in NYC. When Rick showed me how to use inverted paradiddles, the ease with which I could play cool sounding stuff seemed almost like magic to me.

The way you can take rudimental patterns and turn them into great sounding drumming is really quite stunning. It’s no joke and it’s really simple. The only truly difficult thing about any of this is getting your technique to a place where you can play these rudiments so that they sound good.

Here’s how it works.

You learn a pattern until you can play it thoughtlessly. Make sure you understand where the accents are easily played. Then you learn how to manipulate the accents and vary them easily.

Finally, you apply it to the drum set by changing the orchestration, metrics, splitting your hands up between drums and cymbals, and otherwise being creative. That’s all there is to it.

That’s all I do in the video and PDF on inverted paradiddles included here, but the method is effective and the resulting drum set applications sound great.

You can watch my video lesson on inverted paradiddles and how to develop facility with them below.

The PDF with all the exercises from the video including how to use Syncopation as a source guide for accent placement is here: Inverted Paradiddles

Please feel free to give this a try and let me know how it goes.