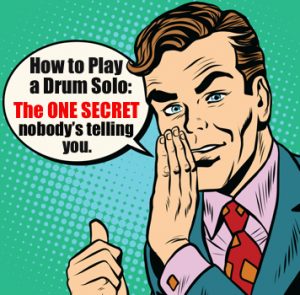 Many drummers love drum solos. Do you?

We often revere those who play them well. Yes, any drummer who understands their role in music will believe in the power of groove, but many (dare I say most?) also covet the ability to solo.

There are many steps a drummer must take in order to develop the ability to play a great drum solo.

Many of those steps require the development of very difficult skills that take a significant amount of time to master, yet won’t guarantee that the drummer in question will actually be able to play a good solo.

Technique is the first good example of what I mean.

It generally takes years to develop a high level of hand technique. You need to be able to play the rudiments well. But rudimental and technical facility–on their own–won’t necessarily translate to soloing ability.

A solid vocabulary of hand-foot ideas and the ability to play them well in different rhythmic metrics is another requirement. Again, acquiring this skill takes a lot of time and won’t guarantee that you can play a great solo.

Because it’s important to transcribe solos of the drummers whose soloing you like in order to begin learning how to do it yourself.

The old adage, “imitate, assimilate, innovate” applies here. You transcribe to understand and to imitate. You practice the vocabulary you’ve transcribed to assimilate. Then, you can alter and use the ideas of your heroes as a jumping-off point to create new vocabulary of your own.

Rhythmic literacy is required to transcribe and then to have the ability to use that information and manipulate it.

Once again, this process does not guarantee you can solo either.

There are other factors and knowledge that are important: 1) Understanding song form and being able to apply it; 2) Fluency in different time signatures; 3) Understanding how to use motivic development; 4) Musicality and taste.

OK, now you might be thinking, “Are you kidding me? I have to go through all that and then I STILL might not become a good soloist? This seems impossible!”

Never fear. There is another element that no one talks about. And that “missing piece” is a method that will help you to develop the ability to improvise by creating the muscle memory on the mechanics of the ideas you want to use to create your solos. It’s basically an exercise that helps you to put all the pieces together.

Here’s what it is.

Do you remember that Weckl video from the late ’80s called The Next Step? The secret is in that video.

Somewhere late in the video, Weckl, in the soloing section, demonstrates an exercise where he plays 16th note triplets continuously.

He outlines ten variations of hand-foot triplets as the basis of the exercise. By the way, I detail every one of those ten hand-foot triplet vocabulary germs in an article elsewhere in this blog called “Drum Solo Secrets: Dave Weckl’s 10 Triplet Ideas from The Next Step.” You can check that out by clicking HERE.

Then, Weckl proceeds to play those ten hand-foot triplet ideas, mixing them up all over the drum kit, while blending them together with hand patterns that he prefers. The entire time he does this, he is playing continuous 16th note triplets. He does this several times at different tempos.

If you use this exercise and apply it to every important subdivision (eighth note triplets, 16th notes, 16th note triplets and 32nd notes) and then eventually work on combining all of the four exercises together so you can weave in and out of every one of those subdivisions, you’ll be able to improvise pretty easily.

It will take a lot of time and hard work to get fluid with this and to work out your own ideas this way.

But it will work.

The key is to start working on these exercises very SLOWLY. Isolate each subdivision type and focus only on that for a while. You could spend months on each subdivision, but that’s OK because the result will be that you can solo at a completely professional level. Plus it’s going to be fun going on this journey.

But in order to be successful with this, you must start at very slow tempos. I can’t stress this enough. Going slowly will give you space and time–both mentally and physically–to work out ideas and get them to flow. Mess around until the ideas are to your liking and you can link them together freely.

Then gradually speed things up.

A few last thoughts. Make sure you write down the things you come up with that you like! Develop the ability to keep the hi-hat going on quarters or eighth notes when you are playing the exercises. Use dynamics.

Finally, don’t forget to record yourself. You might think something you play is great only to find out it sucks when you hear it on tape. The reverse will also be true. There will be times where you’re unhappy with your playing while you’re practicing, only to discover that you played some really cool stuff that you actually like.

That’s it! That’s the secret. This one exercise that ties everything together. I’m not saying it’s easy. It isn’t. But it works! I truly don’t understand why nobody has written about this before, but I’m happy that I am able to share this with you.

Try it and let me know how it goes.