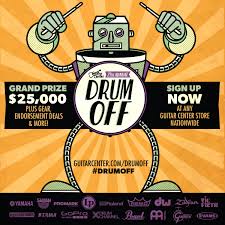 Prediction: Luis Burgos Jr will win this year’s Guitar Center Drum Off competition. I saw Luis twice during this year’s contest, which concludes with the Grand Finals on January 16th, 2016, in Los Angeles. FYI, Luis competed via the North East region.

I was at the Quarter Final round at NYC’s Union Square store on October 27th, which Luis easily won. He crushed everyone. No contest. Then, on November 17th, I attended the Semi Finals at the Times Square store. The competition was tougher, but again, Luis was very clearly the winner. He was significantly more polished than any other contestant. There is a link to a video of that performance near the end of this post. Another reason I’m betting on him is that he’s been to the finals before (2010), so he’s not green in the ways of the Drum Off.

So, I’m going out on a limb to predict that Luis Burgos Jr will win Guitar Center’s 2015 Drum Off. Let’s check out some videos…

From April 2015 at NYC’s The Red Lion with the band City of Six:

At the Brooklyn store finals on October 7th:

So, watch out for the Grand Finals in January, and make sure you check out the video of his performance there so you see and hear what is certain to be a masterful performance with serious drumming bad-assery. The video and audio from the Grand Finals are always top-notch, so it will be a treat.